Henk van Meerkerk, head of production at Fox Sports the Netherlands, will take the Bergen audience through its ongoing VR, VAR and audio innovations on 7 March.

Fox Sports is the rightsholder for Eredivisie Dutch football plus the first and second league divisions, as well as the UEFA Europa League and the Bundesliga in the Netherlands. 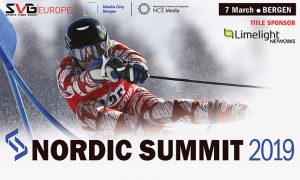 particular, in order to constantly get closer to the action. This includes use of a virtual reality tool it developed in collaboration with Beyond Sports and ChyronHego, which is used live every week in coverage.

Virtual reality will be a key topic for van Meerkerk at the Nordic Summit, in conversation with SVG Europe editorial director Fergal Ringrose. The theme of the conversation is ‘Being More Open’, as Fox Sports constantly strives to provide its viewers with ever closer access to the game, whether in its camera and microphone usage or its coverage of VAR incidents in collaboration with the Dutch football association for its Sunday evening match wrap-up show.

As with all SVG Europe events, there will be ample networking opportunities throughout the day including one the night before the Summit, on the evening of Wednesday 6 March.

The Nordic Summit, produced in association with NCE Media and Media City Bergen and sponsored by Limelight Networks, will take place on 7 March 2019.

To find out more and to register please visit: https://www.svgeurope.org/nordic-summit-2019