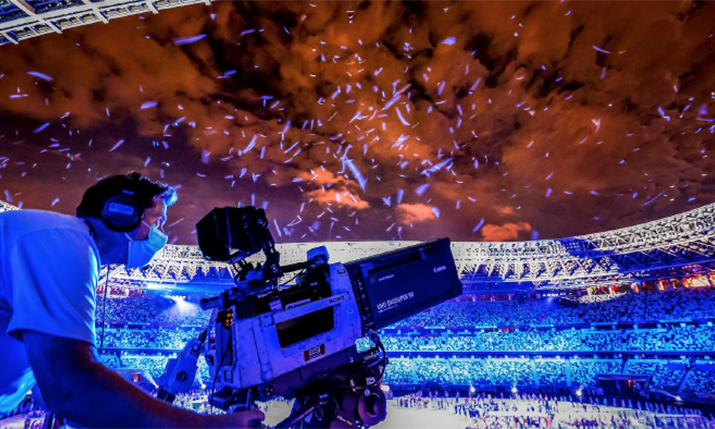 When planning for the outside broadcast (OB) vans or fly-away systems that will be used for the coverage of the Olympic Games, as host broadcaster, OBS always faces the challenge of addressing three key factors: footprint that will be required in the broadcast compound at the venues, but also the actual space inside the production unit to fit both equipment and the dedicated production crew; functionality (ensuring all hardware resources are configured and up-to-date as to deliver the level of production required) and logistics (ie, sourcing the production units, bringing them halfway across the world when not sourced locally, shipping specialised equipment, crewing the technical and production crews, setting up at the venue etc.)

Working closely with worldwide TOP partner Intel, OBS has been exploring more flexible and modular production environments with the goal of reducing logistical and operational complexity compared to traditional broadcast infrastructure, increasing flexibility and reducing the overall broadcast footprint at the venues and the IBC.

“Flexibility and scalability, and especially the potential to maximise our production workflows, are behind OBS’s cloud strategy and virtualisation efforts. Virtualised production set-ups will make our workflows a lot simpler, allowing us to deliver a very high quality production with greater agility, reduced footprint and cost efficiency. Making some OB van functions independent of physical infrastructure and moving them into the cloud will also help reduce our set-up time and broadcast footprint”

Since January 2021, OBS’ advanced technologies manager, Geert Heirbaut, has collaborated with Intel teams to successfully design a forward-looking virtualised OB van that is able to support agile production and provide the utmost in performance and with flexibility.

In use as a proof of concept during the Olympic Winter Games Beijing 2022, OBS will be testing this new live production environment at the curling venue.

Based on a cloud-hosted, software-based architecture that mirrors the function of a traditional OB van, the venue production crew will perform their job from a production gallery in the compound, using commercial off-the-shelf (COTS) solutions that offer a similar user experience as traditional broadcast appliances. An on-premise data centre will replicate the cloud-based architecture platform.

The first stage of this innovative project will give priority to functionality and interoperability, as well as ingesting and processing of the 1080p50 SDR video feeds coming from 18 cameras used for the coverage of one of the sheets at curling, alongside the audio feeds.

Virtualisation will redefine broadcast production requirements and workflows and simplify them. This approach allows the broadcast production environment to be scaled to cater for changes in demand and workload, with production workflows that can be spun up and down as required in a matter of seconds. It will also reduce the set-up time to the minimum, given that the systems can be configured remotely before moving to the host city.

In the future, one could imagine having more flexible production crews, not necessarily based in the venue compounds, but perhaps operating from their own country premises, eliminating the need for dedicated full production crews on-site and avoiding the long-term rental of worldwide broadcast equipment for the live production of the Games.

5G-connected cameras will also be used as part of the virtualised OB van project to capture the action from curling.

OBS conducted several field tests of network performance and quality from the end-user perspective on 5G networks at PyeongChang 2018 and Tokyo 2020, with excellent results in terms of picture quality. OBS will now take full advantage of Beijing 2022’s solid network architecture to transmit live content during the Winter Games via 5G for the first time.

OBS will capitalise on super-fast 5G wireless connectivity to deliver signals from more than 30 live and near-live cameras, including those fitted on snowmobiles at cross-country skiing and also those used in the start and finish areas at alpine skiing.