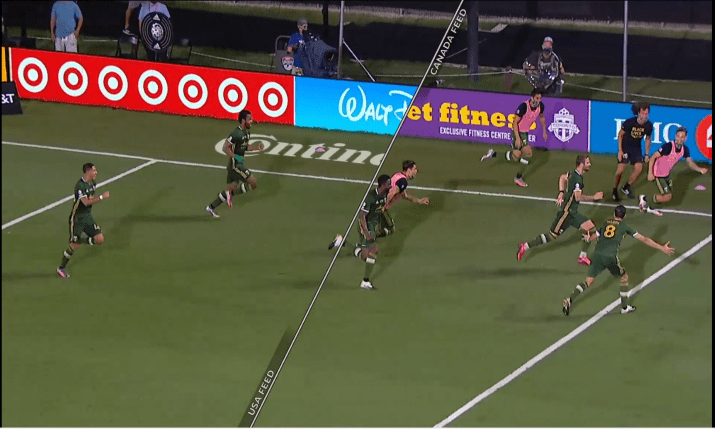 Dynamic advertising solution Parallel Ads will be a feature of the FA Cup Final broadcast this weekend, just as it was for the semi-finals. It’s a high-profile application which technology inventor Appario Global Solutions (AGS) hopes will be a launchpad for even wider adoption.

“What we are doing with the FA will build trust of our solution among other productions,” says Max von Braun, founder, AGS.

The solution is based on the patented Dynamic Content Multiplication (DCM) technology that can also provide similar benefits to music and other live events as well as studio productions. As opposed to a virtual overlay, which creates a new advertisement in post-processing, the DCM technology enables rights holders to broadcast up to four simultaneous feeds for event-based LED advertising from a single camera, and tailor these ads to different markets. Anyone present in the stadium will only be able to detect the venue feed/naked eye, while Parallel Ads (PADS) content is captured by the camera and displayed in real time.

While the technology works with more conventional rolling shutters, it is optimised for live system cameras with a global shutter. Currently, that narrows the choice to cameras from Sony, including the HDC-5500 which has native 3x UHD CMOS sensors and incorporates global shutter technology.

“When we ‘hide’ information on an LED screen it’s important that you can’t see this with the naked eye otherwise it would be visually distracting,” says von Braun. “The faster and more precise the PADS timing, the better. With a rolling shutter the image will appear correctly synchronised within more than three milliseconds of exposure, but running a global shutter reduces this to a fraction of that exposure time.”

This works even when operated with super slow motion. “Within a production frame we need to show the content six or eight times without being interrupted by alternate signals. A global shutter allows us to run more sophisticated timings and allows for that.” 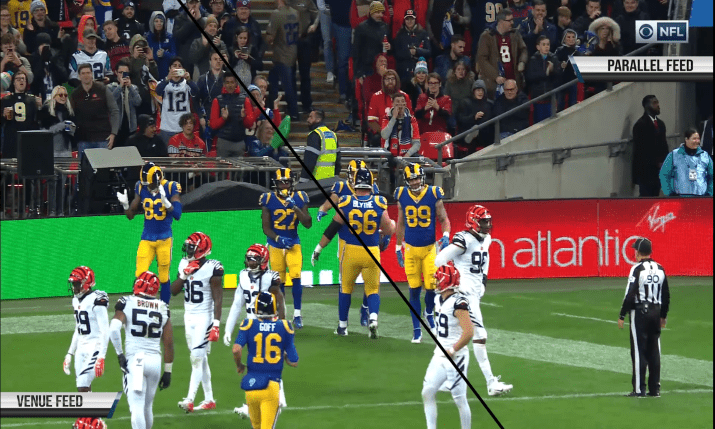 The NFL is testing the system from Parallel Ads

The FA Cup semis are a complex affair involving three different broadcast service providers over a weekend. Arena TV partnered with BBC Sport for the first semi-final  on Saturday 17 April before Telegenic and BT Sport took charge of Sunday’s match which entailed a, “complete change over, rip out and install”.

Fortunately, the FA works with Gravity Media to produce the host international feed for all matches.

“They have their own unit, like a unilateral broadcast feed, and they manage the signals we create on site,” says von Braun.

The host feed is transferred to Gravity’s remote broadcast centre at Chiswick for the addition of graphics and audio mix before onward distribution via BT Tower. A similar workflow, using just the one main centre pitch camera (HDC-5500), is in place for the final at Wembley.

“Our solution fundamentally broadens the horizons of rights holders, allowing them to engage with different sponsors simultaneously or tailor sponsored content to each market”

AGS is producing three feeds for Gravity’s production in addition to the standard UK and rest of world feed: one for MENA, another for Asia and one for Europe excluding the UK.

“Synchronisation is done by configuring the camera settings with the LED board. No additional hardware is required. Once a camera is synchronised to PADS, the multiple feeds are directly available in the vision mixer. We do this by connecting a reference signal of the host broadcaster to the LED playout system to ensure the identical clocking. The referencing of the host broadcaster’s cameras stays untouched.”

All this takes 45 minutes at the most and more likely just 20 minutes. “Once the signal is set it can stay unchanged for weeks,” he says. 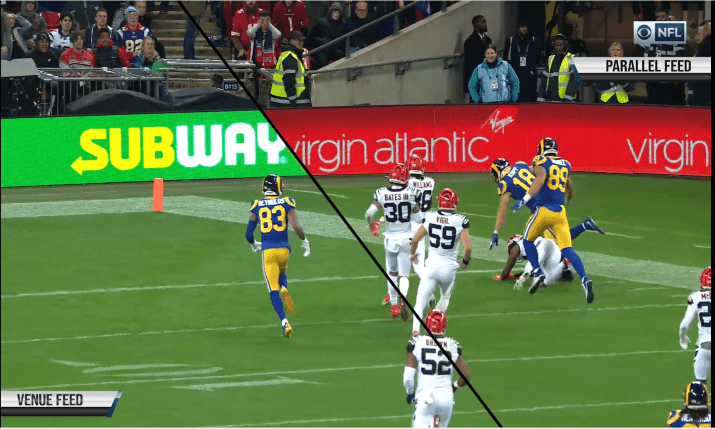 “The client is free to synchronise as many angles as they wish, including slow-motion shots and highlights.”

PADS came about after von Braun began exploring how to create 3D holograms for viewing glasses-free. He tried to bring the technology to market in 2015 and found that transferring some of the basics of it to 2D LED was an easier first step. He realised that there was latent demand for a solution to producing multiple simultaneous ads in live sports, reworked the idea into Parallel Ads and founded AGS in Switzerland in 2016.

“I had no background in broadcast or sport, I was just a pure technician, but we quickly found interest from content providers like Infront Media and from soccer clubs in Germany who wanted to deploy with us.”

That sparked interested from TGI Sport, a subsidiary of QMS Sport Holdings, to license DCM exclusively worldwide. That deal was signed just before Covid hit but since then – during the pandemic – AGS has rolled out PADS to 70 events.

The biggest to date was for the five-week return to action of the MLS from its base in Florida. The MLS is Back tournament took place inside the league’s bubble at ESPN’s Wide World of Sports in Orlando last July. The PADS technology delivers two 18-camera feeds across the US and Canada for all 44 matches.

“We were able to work with Sony HDC-2500s since PADS deploys on older camera systems such as these,” says von Braun.

He says there is no additional cost whether you run one or 20-plus cameras with Parallel Ads during the same event. “The client is free to synchronise as many angles as they wish, including slow-motion shots and highlights.”

In contrast to virtual solutions, external environmental factors such as rain, fog or snow will not impact visual output. Likewise, cameras do not need to be static, making drones a possibility.

“We are close to developing a solution that works without requiring a dedicated engineer on site,” he adds. “For the FA Cup semi-finals, I did all the synchronisation remotely working with the standard LED crew. I want to have a technology you can just turn on and deploy in as many cameras in whatever position you need.”

The NFL is testing the system. On his target list are sports such as horse racing and motorsport where it is important that horses or drivers are not distracted by any LED flicker around the circuit.

“With our tech you can turn the feed off for the naked eye. We can run the signal at such high frequency the naked eye sees no flicker at all,” concludes von Braun.

“Our solution fundamentally broadens the horizons of rights holders, allowing them to engage with different sponsors simultaneously or tailor sponsored content to each market.”