CBS and Turner Sports have again rolled out a gargantuan onsite operation for the PGA Championship, involving 20 mobile units, 110 cameras, 175 microphones and more than 40 miles of multistrand fibre.

All of this technology is deployed at Bellerive Country Club in St. Louis, for the 100th edition of the PGA Championship. In addition, CBS is producing 4K HDR coverage from Holes 16, 17, and 18 and, for the first time, is using an at-home production model for its onsite CBS Sports Network studio shows, using the CBS Broadcast Center in New York City.

Although CBS produced a 4K HDR test feed last year at Quail Hollow and has produced 4K coverage on selected holes at the PGA Championship for four years running, this week marks the first time a 4K HDR feed of the tournament is being delivered to the home, thanks to AT&T’s DirecTV. With this tournament, DirecTV has now delivered all four golf majors in 4K HDR to qualifying subscribers.

“We’re a year further down the line, so we push [4K HDR] further each year,” says Ken Aagaard, EVP, innovation and new technology, CBS Sports. “I’m very proud of the fact that we’ve advanced [4K HDR] and understand this technology as well as, if not better than, anybody else at this point. We can truly produce this HDR feed and still be able to put out a good SDR signal utilizing one truck.”

This year’s 4K HDR production is taking place on Holes 16, 17, and 18 and is being run out of F&F’s GTX 18 mobile unit (A and B). All coverage from the three holes is being produced in 4K HDR and downconverted to HD SDR to serve DirecTV’s Mosaic coverage of the same holes.

“We have the SDR conversion really dialed in,” says CBS director, Remote Engineering, Mike Francis. “We are now of the opinion that our SDR downconversion is equal to our native SDR productions.”

A total of 15 4K HDR cameras with Fujinon 4K lenses have been deployed for the show: 14 Sony HDC-4300’s and CBS Sports’ first-ever use of a 4K HDR RF camera (supplied by BSI). The production team also has five EVS XT4K replay servers at its disposal.

Besides having camera and replay sources comparable to a standard HD production, CBS has made “no production compromises due to the 4K HDR format” and is “using a full complement of technology,” according to Francis. This includes deploying Toptracer ball-tracking technology over native-4K HDR images and Virtual Eye 3D graphics upconverted from 1080p/59.94 to 4K HDR.

“We can’t sacrifice the quality of the feed [compared with the HD show],” adds Aagaard. “We’re pretty close to having that done at this point. And the graphics are now much more advanced for 4K as well. So just like when we went from SD to HD, we start to pick up a lot of those peripheral pieces of gear that are now HDR-capable. Our engineering team working on this the last three or four years are just amazing, and they’ve come up with some very clever ways of getting this all done right.”

For the first time at the PGA Championship, CBS Sports is using a control room at its broadcast centre in New York City to produce its onsite CBS Sports Network studio show. The at-home production model is being used for CBSSN’s PGA Championship on the Range on Thursday and Friday and Clubhouse Report all four nights of the tournament.

Onsite infrastructure for the at-home operation is located in NEP ND7’s B unit and uses a JPEG2000 path to a dedicated control room in New York for minimal latency. 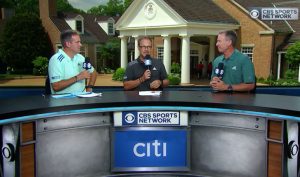 For the first time, CBS is using an at-home production model for its onsite CBS Sports Network studio shows

“From the technical side, we just wanted to make [the production team] feel at home and not feel like they’re sacrificing any production value because they aren’t here onsite,” says Francis. “We’ve taken some steps to ensure that there is [minimal latency] with our IP transmission. In New York, they have everything they would have [onsite]: their switcher, graphics, EVS [replay], and all the comforts of the mobile unit. They are not in a purpose-built at-home control room yet, but that’s where we’re hoping to get to in the future.”

To serve the quick-turnaround needs of the preview and highlights shows, CBS has established a dedicated JPEG2000 file-transfer path between Bellerive and New York, opting to leave one EVS system onsite with real-time access to all content on the main show for time-sensitive packages.

“[The at-home setup] helps us dial down the congestion in the compound,” notes Francis. “We were careful to design it in a way that doesn’t compromise the production value. Especially for the Clubhouse Report, which produces a lot of highlights and relies heavily on the main show’s EVS/media network.”

At the heart of It all: NEP’s SSCBS and Game Creek’s Encore

Of course, the 4K HDR and CBSSN at-home shows are just small pieces of a colossal picture for CBS and Turner onsite. A total of 20 mobile units are in the Bellerive truck compound, led by NEP’s SSCBS (A, B, C, and D units) producing the back nine and Game Creek Video’s Encore (A, B, and C units, plus Edit 4) handling the front nine. In all, the operation features a whopping 26 EVS replay systems (totaling 194 channels), including five EVS XT4K’s. In addition, CBS’s audio workflows continue to mature with each passing year.

“Our audio strategies have continued to develop,” Francis adds. “We are using a combination [Calrec] Hydra2, Dante, and MADI [network] for audio-signal distribution. We have worked hard to improve redundancy and signal density. Each year, we lay less cable on the ground but distribute more video, audio, and network data around the compound.”

NEP once again has a significant presence in the compound. Besides SSCBS, there are ND7 (A, B, C, and D) supporting the Featured Group streaming production, CBSSN at-home production, and the 4D Replay and Hawkeye Green technologies); TS2 (A and B) serving as home to Turner’s PGA.com coverage; and ESU managing video/audio distribution and transmission.

“The CBS crew has become very comfortable using these huge trucks full of the latest technology,” says NEP Engineering Manager Bill Niehoff, referencing SSCBS at its third PGA Championship for CBS. “The Evertz EXE IP router and RTS OMNEO IP intercom have not only made operations inside the truck easier and better but also streamlined distribution outside of the trucks. And. with the new tracing and tracking technology being a priority [this year], SSCBS definitely has the people space and bandwidth to expand with CBS’s demands.”

NEP is also supplying Chromium and Nickel for IMG’s world-feed production and ND6 for Golf Channel’s Live From the PGA Championship onsite studio show. BSI’s Golf 4 and Golf 5 RF trucks are on hand, along with VER’s Flex 10 truck for executive viewing.