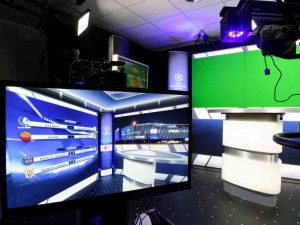 PLAZAMEDIA has reconfigured the UEFA Champions League mobile studio for ZDF by way of virtual graphics and augmented reality elements. As a result, the studio dimensions normally available at the stadium, which in some cases amount to only 16 sq. m., can be optically enlarged using special computer graphics technology.

The additional space gained by virtually creating some of the walls and ceilings allows for an entirely new visual language and integrates images from the sports venue in a way that gives viewers the impression of being at the centre of the action. This virtually enhanced studio was first used during ZDF´s broadcasts of the UEFA Champions League round of sixteen in mid-February – most recently during the Benfica Lissabon versus FC Bayern München game.

Following an intensive development phase, an innovative solution was created together with ZDF which, over the next few years, will offer the ZDF editorial team considerable ‘room’ for staging its studio broadcasts of the UEFA Champions League.

Low ceilings and small areas – the spatial conditions for the productions from ZDF´s mobile Champions League studios have been limited so far in terms of image format. Now, two cameras can be tracked on the new set and some of the real decorative elements supplemented with virtual surfaces and graphics.

At points where lamps, air-conditioning or other cameras could previously be seen in the picture, there are now augmented reality wall and ceiling elements which can be filled with content on the computer on a flexible basis, making the studio appear significantly larger, more structured and more modern.

A virtual video window now offers adequate space for graphic analyses, interviews or for integrating events taking place simultaneously in the stadium. To give viewers the feeling of a live, on-site experience, the background perspectives can be varied, offering for instance a view of the pitch from the stands or an atmospheric view of the stadium.

The new studio technology has been realised in this demanding mobile production environment based on the highest standards of operational safety and system reliability.

Jens Friedrichs, Managing Director Production at PLAZAMEDIA: “By fully combining virtual camera technology with augmented reality elements, PLAZAMEDIA has, in tandem with ZDF, realised a solution which is to date unique and provides an impressive demonstration of its innovative strength. The new, virtually expanded studio is setting new standards in mobile outside broadcasting. In view of the often limited on-site workspace available, two aspects were of particular concern, namely lean workflows and the possibility for ZDF´s editorial teams to dynamically integrate these new techniques into their work in various ways. This solution could only be realised based on close co-operation between ZDF, its editorial teams and PLAZAMEDIA. We are very proud that, as a result of this dialogue, we have created a technological innovation and will continue to jointly develop it further.”