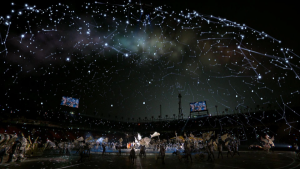 Brainstorm’s InfinitySet played a key role in the Augmented Reality (AR) elements that were broadcast as part of the opening ceremony of the 2018 Winter Olympic Games in PyeongChang.

The Madrid-based firm’s technology, supplied through its Korean reseller Unwin, was used to create ‘hyper-realistic’ 4K AR components including a dome made of stars and virtual fireworks that were synchronised and matched with real event footage.

This was achieved by using the Combined Render Engine feature of InfinitySet which combines both render engines.

The setup for the ceremony also included two Ncam-tracked cameras and a SpyderCam. This allowed for long-travelling tracked shots flying all around and above PyeongChang’s Olympic Stadium.

Miguel Churruca, the marketing and communications director at Brainstorm, talking to SVG Europe, explained how the AR-style effect was created for viewers.

“The graphics were inserted in real-time into the event’s live signal, therefore the audience at home saw the ceremony with the AR graphics included,” he said.

“Of course, those attending the ceremony at the stadium saw the real event live and not the enhanced imagery, as it was broadcast.

“The difference between 3D graphics and AR is a good point to discuss, as AR is normally using 3D graphics to display information or additional content. We consider this AR as it enhances the real footage, and it is perfectly integrated with the live signal (by using photorealistic rendering, tracked cameras and real time technology),” he added.

Brainstorm, working with the event’s contractor, CJ&EM, also helped to deliver the imagery and effects for the ceremony.

“Graphics artists from our production services team were in Pyeongchang helping with the set up, coordination, and calibration for the different gear involved and supervising the final event,” noted Churruca.

On how AR can be used to improve sports broadcasts generally, Churruca said: “AR is a very useful way of providing in-context information and enhancing the live images while improving and simplifying the storytelling. Examples of this can be found in elections nights, plus entertainment and sports events, where a huge amount of data must be shown in-context and in a format that is understandable and appealing to the audience.”