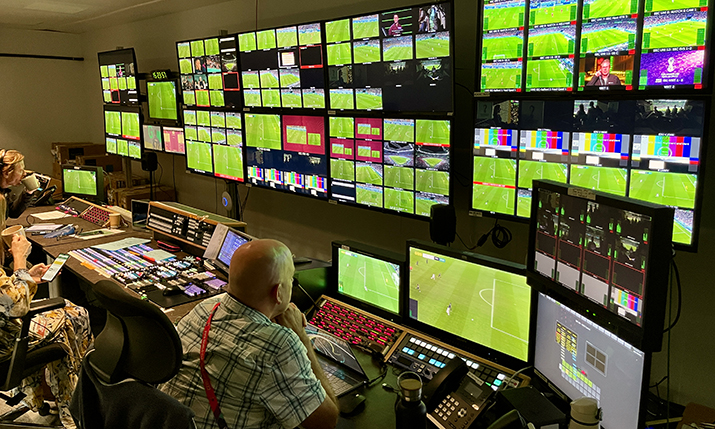 Qatar 2022 is the 15th consecutive FIFA World Cup that BBC and ITV have broadcast together, continuing their long-running and hugely successful partnership, but this is the first time they have shared back-end resources.

It is a measure of how much the technology and the economics of live broadcast have changed since the World Cup’s last outing in Russia that both free to air broadcasters felt able to rely on a remote and shared production infrastructure just four years later.

It speaks to the albert-certified environmental policies that both broadcasters have pledged to undertake with their programming as much as to the financial advantages to be had in sending fewer technical and crafts personnel out to the Middle East for a month.

“Neither broadcaster could have gone ahead with such an ambitious production plan without the other,” says Phil Bigwood, executive producer, BBC TV Football, for whom Qatar is his sixth World Cup production. “It’s been a major plus in enabling us to put more facilities in the UK and to share technical crew. We share connectivity and access to the FIFA server and elements like that to help with workflows.”

Timeline has been hired as the facilities provider for the joint technical effort. It has outfitted studios at each of the eight stadia, equipped a production gallery at the IBC in Doha and rigged another at HQ3 in Dock10 for the BBC. Both are being remote controlled from hardware located at Timeline’s truck parked in Salford. All sound, graphics, VT and vision is mixed and operated in either gallery using surface panels.

Timeline is also providing core technical crew to both broadcasters including a unit manager, camera lead and sound lead at each venue working with key production personnel such as directors hired by each broadcaster. Both broadcasters are taking the full package of HBS feeds augmented by unilateral camera teams on the ground and separate match day directors.

“Presentation is clearly different but whether ourselves or ITV are going to air with the same camera team should make no difference to the audience experience,” Bigwood says. “There was quite a strong financial consideration to having two galleries. As the tournament progresses into the last sixteen and beyond we won’t want to keep two galleries and all staff in place.”

After the World Cup draw in April the broadcasters divided their match split. “ITV had first pick this time since we had it in Russia,” Bigwood says. “Broadly, the bigger matches will be directed from Doha where the lead editorial crew is closer to on-air talent. There are also certain occasions where there are back to back matches and simultaneous matches where we could not produce it all out of one gallery. So we alternate between the two.”

With 20-plus feeds being shuttled over redundant fibre lines from Doha to Manchester and back again, the latency was going to be critical. After multiple tests in prep, they were confident of keeping this to well below a second.

That is different on streams to iPlayer and ITVX where the BBC has felt the need to explain the noticeable delay over that of a live to TV broadcast. It fielded a blog by BBC R&D talking about the industry-wide issue of live streamed latency and the efforts the BBC itself has made to counter and improve this.

Neither broadcaster has chosen to present with an expansive virtual studio. Largely this is a cost cutting exercise but also one that emphasises the ‘at-the-game’ nature of their pundit and presenter style coverage.

Bigwood says: “The studio is literally in a box at each stadia and because of that and the intense match scheduled in which we have to derig the BBC set for ITV to rig theirs and so on there is not the time to rig a full augmented reality set.”

The coverage is drawing big numbers with over 16.59 million TV viewers watching England’s 3-0 win over Wales on BBC One. That figure does not include the number who watched on Welsh language channel S4C or viewers watching on iPlayer (neither included in Barb’s data). The BBC said its match coverage across all its platforms – TV, iPlayer and BBC Sport Online – was watched by a peak audience of 18.7 million.

ITV commercial teams will be hoping for a huge ratings boost when it hosts coverage of England’s round of 16 match with Senegal on Sunday 4 December.

The UK broadcast rights to the next World Cup in the US, Mexico and Canada 2026 have yet to be signed with FIFA, although ITV and the BBC will show both UEFA Euro 2024 and UEFA Euro 2028 under a new deal agreed with UEFA.

More than a decade ago, both UEFA and FIFA failed at the European General Court to reverse the UK’s free-to-air protection for all matches at the men’s European championship and World Cup.

FIFA is anticipating revenues from broadcasting rights of more than £1.9 billion in 2022.