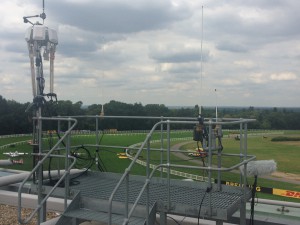 In the latest stage of its long-running involvement with the spectacular Red Bull Air Race World Championship, Riedel provided a sophisticated and flexible signal transport and communications infrastructure for the event that took place at Ascot Racecourse, UK, on 15-16 August.

Repeating the pattern of recent previous editions of the Air Race, Riedel engineers again built a signal distribution infrastructure for video, audio and communications and data based around a MediorNet real-time media network. Technicians interfaced audio signals via both MADI and Riedel’s RockNet digital audio network solution, in combination with the MediorNet system. Meanwhile, a Riedel Artist digital matrix intercom served as the events communications infrastructure, and was integrated seamlessly with Riedel’s digital trunked (TETRA) installation.

In total, the TETRA base stations supported in excess of 500 handheld radios to guarantee full event coverage, while RiFace universal radio interfaces allowed analogue radios to be utilised too. The distance between the race airport and the broadcast hub was handled by Riedel’s real-time media network, MediorNet. It can be handled by a broadband link, too, set up by Riedel.

Also of particular note for this edition of the Air Race was the further refinement of a red onboard comms box that helps facilitate coverage from the pilot’s perspective. The box was first introduced in time for the 2014 championship, and the complete onboard system now weighs just 4 3,3kg – a significant bonus when the onus is on minimising onboard load whenever possible. 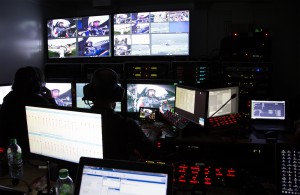 Rivens confirms that Riedel UK’s support to the Wuppertal-based team working at Ascot was fairly minimal – “they are operating pretty much self-sufficiently” – but says the event has great local benefit in terms of showcasing its solutions . “It’s really a great opportunity to say here’s what we do and bring prospective clients along,” he says. “One can talk about the capabilities of MediorNet and Artist, but it’s taking the clients to see them in action that really brings it all to life.”

Once again, the latest Air Race found Riedel working in close collaboration with OB providers TVN and Euro TV. “We have worked together on many projects over the years, and have an excellent relationship with both,” confirms international marcom manager Serkan Güner.

In addition to the Riedel technology, the TVN set-up at Ascot included a Lawo audio router and mc256 console, EVS servers, Vizrt graphics solutions, and more.

Looking ahead, the next Red Bull Air Race events will take place in Spielberg, Austria, from 5-6 September, with visits to Fort Worth and Las Vegas on the schedule for later in the year.