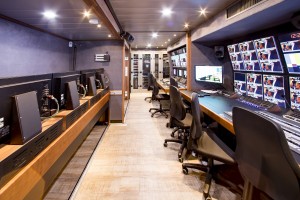 “MediorNet’s decentralized routing approach is perfect for live broadcasting. Not only does it reduce the single points of failure, but it also makes things simpler and more efficient by placing physical I/O closer to where it’s needed while also reducing copper,” said Rainer Kampe, Broadcast Solutions CTO. “Alphaline A12 is our first OB deployment of MediorNet, and we know we’ve made the right choice to deliver the bulletproof communications capabilities Televízia Markíza requires.”

“Alphaline A12 is the missing link in our production capabilities because it now allows us to shoot all of our live programs in full HD. With state-of-the-art systems such as MediorNet and Artist, the new van is a critical element in our ongoing mission to attract new viewers and maintain market share,” said Mattias Settele, General Director, Televízia Markíza. “The Riedel solutions deliver the perfect blend of high-quality output and reliability for even our most demanding live productions.”

“Alphaline A12 is our first OB deployment of MediorNet, and we decided to get the best solutions available in order to have the most universal OB van possible,” said Zdenko Ryšavý, Technical Director, Televízia Markíza. “Televízia Markíza is now perfectly positioned for future growth at home and in the European OB market.”