It is aimed at covering small or medium-sized sports venues that fall within its maximum flying area of 80x80m. It has a permanent 3-axis stabilised camera system, allowing the camera to move freely through space both vertically and horizontally and “you can integrate any camera manufacturer’s compact or block cameras with an ENG lens,” said Marc Schroeder, senior operations manager, Robycam Germany.

“As we have very strong winches, with a gearbox inside, we are able to work with a very reduced loss of height,” he added. This makes it ideal for such sports as basketball, volleyball or ice hockey, as well as for use in studios, even if they have low lighting grids. 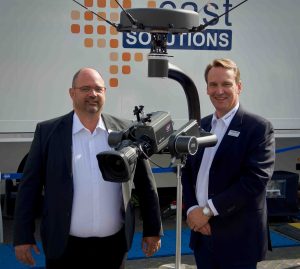 It uses a new type of winch that can even be used standing upright, to fit in very confined spaces. They are also much lighter (about 120kg), half of the weight of the winches used on the bigger Robycam 3D. The gearboxes mean they are also about 20% stronger, but they can only carry 120m of rope, whereas the 3D can cope with 330m, which means it can be used on sports like cricket. The company intends to add gearboxes to the bigger winches of the 3D, although in most situations where it is used there is more than enough space for them already.

The Compact is made from carbon fibre and weighs 4.5kg without the camera, battery and lens. The batteries can run a minimum of six hours (in Winter conditions).

Not only is the Compact lighter, but it requires less rigging time, and it comes with fibre-optic lines integrated into all catenary cables so can transmit a 12G UHD HDR signal. It has a top speed of up to 4.5mps, and “we can record any movement and repeat it again exactly,” or using different timings, said Schroeder.

The Compact was finished just in time for IBC, but has already won an order from ZDF to use it in December for the German Sportsman of the Year awards. 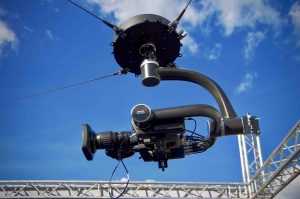 Fly-by-wire: The Compact carbon-fibre cable cam made its debut at IBC

Bayern Munich and Real Madrid and Germany v Brazil in Berlin, using augmented reality for ZDF). It has also done Tennis in Switzerland for NEP, and the Biathlon World Championship for ZDF (and will do it again next year for ARD), where it covered the start and finish lane and all the shooting lanes with one system, “because we can cover such a large area,” said Philip von Senden, COO and managing partner, Robycam Germany, which is a new company, founded in August with Moscow-based Movicom (which makes the rigs) and Broadcast Solutions, the largest partner.

One of the benefits of the Robycam system is that it has Free-D built in, so it can be used for augmented reality, which was demonstrated with Zero Density at IBC. The Finnish Ice Hockey League has just started using the Zero Density system (although not with Robycam).

“We have got better stabilisation for the camera in both systems, and it is easier to integrate AR graphics than our competitors as it is part of the system,” said von Senden, who was previously managing director at Spidercam.

On the 3D it has a polyspast mode, where multiple pulley blocks on the dolly allows it to be rigged much higher for the same rigging positions (possible because the fibre is not in the rigging).

An important aspect of the system is its safety controls. “You can tell the software that there is an obstacle in the flight area that we don’t want to hit with the dolly, and the system knows where it isn’t allowed to fly and it always stops, even if the pilot wants to do it,” explained von Senden.