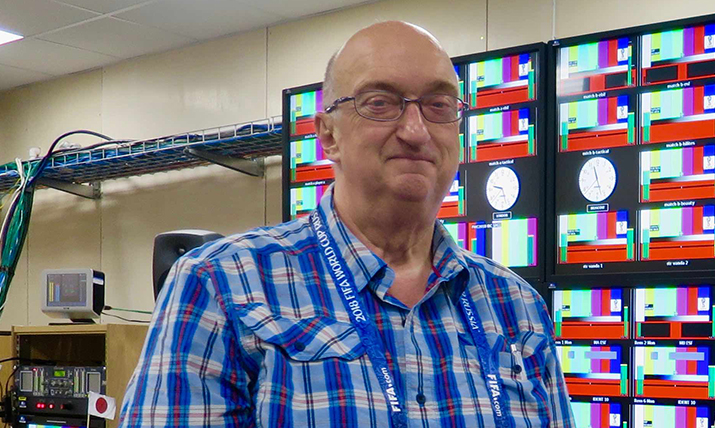 SVG Europe is sad to report the passing of Roger Pearce, ITV’s Technical Director, Sport, and a member of the SVG Europe Advisory Board.

Roger died overnight on Saturday 19 November 2022 while on location at the FIFA World Cup in Qatar.

ITV paid tribute to Roger during its live coverage of USA v Wales on Monday. You can view the tribute on Linked here: Roger Pearce tribute

Roger, who started at ITV in 1979 as a contractor, was due to retire after leading the ITV Sport team’s technical operations in Qatar.

His sudden passing has been met with shock and great sadness by his colleagues in Qatar, within ITV Sport and the wider company.

Niall Sloane, ITV director of sport, said: “The ITV Sport team are devastated by Roger’s passing. He was a brilliant Technical Director and a wonderful colleague and friend. His service to ITV for over 40 years was a testament to his loyalty to the company. Our thoughts are with his family and those closest to him.”

“Roger has been such a popular figure in the department for many years. Anyone who worked with Roger enjoyed his company and couldn’t help but smile when he was around.”

Mark Demuth, ITV controller of sport, said: “Roger has been such a popular figure in the department for many years. Anyone who worked with Roger enjoyed his company and couldn’t help but smile when he was around.

“Roger was the person who made it all happen – whether he was on-site at a minor non-League ground or working across a complex technical operation such as this World Cup. Everyone is feeling numb at the moment and sharing a dreadful sense of loss.

“Let’s look out for each other, as Roger would have done, and never forget the incredible contribution he made to the department and all our lives. Roger was one of a kind.”

SVG Europe would like to pass on its own condolences to Roger’s family and friends, to all his colleagues at ITV and to his peers, past and present, who will all miss him terribly.

SVG Europe general manager Joe Hosken said: “Roger was a huge supporter of SVG, always volunteering ideas, helping out with awards judging and attending our events when his busy schedule allowed. He was a gentleman and a pleasure to work with. His passing has come as a real shock to us all. The sports broadcasting industry was a brighter place for his presence. It will be slightly darker for his absence.”