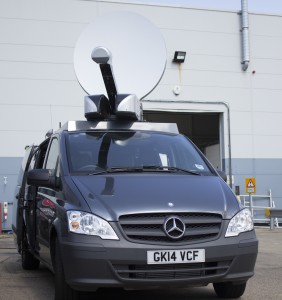 SIS LIVE has confirmed the delivery of a bespoke satellite uplink truck to the British Army, thereby enabling its media teams to supply live HD pictures and other multimedia content from operational theatres around the world.

The company used its systems integration and product design expertise to develop the truck for the Army’s Media and Communications branch (AMC), which delivers footage from frontline operations to broadcasters and other media outlets.

The Army commissioned SIS LIVE to produce a satellite uplink newsgathering (SNG) truck which could be flown to any part of the world and relied upon by its media teams to transmit footage via satellite, to broadcasters in the UK and beyond; providing a vital link between military operations on the ground, and understanding from the general public back home.

AMC specified a vehicle to be used in three distinct roles: as an edit van in all disciplines; as an SNG and as a mini OB van, with the ability to mix and play out live to air on a four-camera shoot.

The team modified a long wheel base Mercedes Vito truck which was large enough to meet the requirements for equipment and operational space, yet was small and lightweight making it suitable for transport by military aircraft. SIS worked closely with the RAF to ensure the vehicle complied with Defence Standards.

Kevin Capon MBE, senior cameraman, AMC, said: “We came to SIS because we wanted a one-stop shop that would design, build and deliver, and provide satellite air time all under one roof.

“The team’s core activity is to support operations such as Afghanistan and Iraq, where it provides material that for security reasons, operational necessity or general sensitivity would not normally be available to the public media.

“We needed ease of use in deploying the antenna and UMS system, as well as a multi-function platform equipped to allow us to work with all the media disciplines used by us: television; stills and the written word, giving complete flexibility of use and 24/7 space segment.”

“Geoff Stoker, head of projects, at SIS LIVE, and his team used their wealth of experience and have worked tirelessly to provide the Army with a unique vehicle.”

David Meynell, SIS LIVE’s managing director, said: “The British Army came to us because of our proven track record of building reliable, flexible satellite trucks using our award-winning hardware. We have proven countless times that we can design and deliver unique, highly specified vehicles and I am extremely proud that our latest supports the British Army.”