To celebrate the return of UEFA Champions League and the new football season, Sky Italia undertook an extensive refresh of its on-air sports studios to enable increased viewer engagement.

Rossella de Vivo, director of the Production & Creative Hub at Sky Italia, underlined some features of 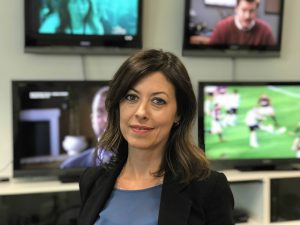 the new operation to SVG Europe. “Sky studios and product sets are always characterised by the desire to offer the spectator a unique and focused experience towards quality. The evolution of storytelling over the years has changed the concept of ‘set design’ that required a review of the design and introduction of advanced technologies.”

The starting idea was “to tell the event better and better,” added Cristina Villella, head of studios at the Production & Creative Hub. “We started by carefully examining the studios of the most attractive international television companies to get the most interesting ideas with the aim of enriching and making storytelling more dynamic and interactive.

“Among the new technologies introduced in the two main studios of Milano Santa Giulia, Studio 2 features a new video projection system and Studio 6 sees the introduction of Totem LED walls. The big news here for this year is a 360° aerial shooting system to allow the viewer to become even more involved in the show.

“The video projection system installed in Studio 2 is equipped with 12 Panasonic projectors at a resolution of FHD – 21.000 ansi lumens, which allows not only complete immersion in the story but also flexibility for quicker response to the emerging demand from our customers who demand more and more in-depth views and analysis segments,” said Villella.

The renewed Studio 6 of Milano Santa Giulia is the new home of football: everything has been realised in order to make the story even more engaging thanks to more than 150 square metres of Unilumen LED totems from 1.9 and 2.5 and a virtual window that allows the use of augmented reality graphics. 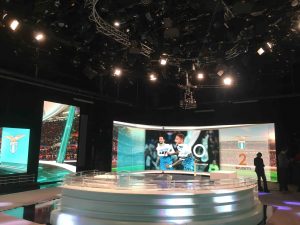 Production & Creative Hub creative manager Vincenzo Lagattolla said, “we designed the new scenography to create more storytelling possibilities, studying innovative solutions for the ‘spectacularisation’ of sporting events. Thanks to the large videowall surfaces, LED wall and video projection, we can adapt the scenographic content to the editorial one, enriching it with AR graphics to provide our customers with a better and more effective in-depth analysis.

“Technology is for us one of the most important things in sports storytelling; never an end in itself, but a support and integration of the story,” said Lagattolla. “Thanks to the LED wall totems it was possible to maintain the visual difference of the various sports programmes, through the creation of specific graphic packages which respect their identity and enhance the format. Graphics and scenography are all one in the design, allowing greater creative and editorial possibilities.”

Studio 2, the largest one, is certified to accommodate an audience of up to 150 people. Here Sky Italia shoots such programmes as Sky Soccer Club, Soccer Market and EPCC, Sports News items and some original special sports productions. There are 12 Panasonic projectors in the studio, as well as eight Grass Valley TV cameras, one Tecno Crane, a Steadicam and eight EVS systems. Studio 3 features a 22-monitor NEC videowall, Mosart gallery automation and six Vinten Radamec robotic cameras. 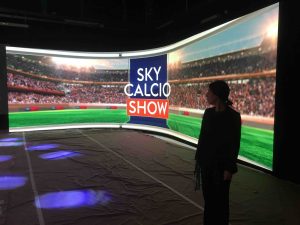