eSports is expected to grow at a rapid pace in the next couple of years. In Germany, Sport1 is presenting eSports news and matches on TV as well as on its streaming platform. 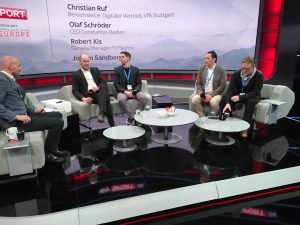 Meanwhile soccer clubs such as VfB Stuttgart and VfL Wolflsburg have created ESports teams. “eSports is well received since five, six years but now there is some media hype,” said Olaf Schröder, CEO Constantin Medien whose portfolio includes Sport1, at last week’s Sky Sport Summit held in cooperation with SVG Europe. “In terms of marketing we can cope with the Handball Bundesliga because we are reaching up to 50,000 young men.”

The German soccer club VfB Stuttgart even created its own eSports team. “It was received very well by the fans from early on,” underlined Christian Ruf, Head of Digital Distribution at VfB Stuttgart. “As a soccer club it is our task to sell emotions. That is entertainment. The young target groups are enjoying in it. They have a lot of professional expertise in soccer because they are playing it live.” VfB Stuttgart also plans to create an ESports team for its second league.

Besides the virtual Bundesliga, eSports fans are also playing ‘League of Legends’ which was acquired for € 80m by Twitch. While the production of the Champions League semi-final has a set-up with 25 cameras, various studio situations, many graphics and LED lights, ‘League of Legends’ is even topping that.

“There were almost 45 cameras at the world final in the Olympics stadium in Seoul,” said Robert Kis, General Manager of TV Skyline. “70,000 people were watching the event in the stadium. Another 30,000 to 40,000 did public viewing because the tickets were sold out. Imagine Dragons wrote a song for it, ESPN2 was live transmitting and about 50 m people followed the live event via internet.”

An eSports event at the venue is a real experience. “The fans are wearing costumes like in ‘StarCraft’”, Joakim Sandberg, COO Dreamhack AB, pointed out. Based in Stockholm, the company attracts about 40m viewers with huge eSports events. “When you look at the overall picture in eSports it is media rights which is gonna grow and sponsorship with an increase of 30 percent every year. All huge global stakeholders are stepping in, even if the structure isn’t there.” 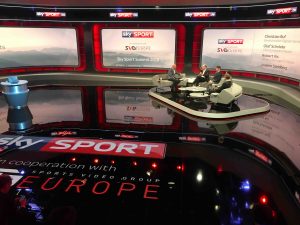 Among them are companies such as Warner, Disney, and Alibaba. “This is perhaps the first time in a couple of years that a new entertainment form in sports will actually arrive on a global scale. It is about being there and trying to see what’s going to happen. There is truly no structure yet.”

Due to the lack of organisation, the market is still messy, according to Olaf Schröder. “There are plenty of ideas to create an international league but the structure is still in the early stages of development.”

Nevertheless he sees a great potential in eSports as well as a benefit for the media. Mercedes is becoming involved in event sponsoring, and Visa and Vodafone have their own teams. Everybody wants to be part of it. Paris has a team and so does Manchester.” Sport1 will also sign on a player.

“The top players are obliged to train several hours each day and also to play with the community,” explained Robert Kis. “The teams have a tactics coach, general manager, a physiotherapist as well as a media manager.”

Sport1 makes a real commitment to eSports and presents it live in prime time – even with the play-off. “You rather get yourself into it as Stuttgart and Wolfsburg or you don’t,” stressed Olaf Schröder. “We have to build up a personality. Therefore we need a magazine that tells the background story because nobody wants to watch some person just playing. Sports is always about who is behind that.”

Therefore, the VfB Stuttgart has chosen two players below 30 who also have an entertainment quality. “Promoting of young talents is a huge issue for eSports. Advancement is not only about the qualification but also about the mental attitude”, said Christian Ruf who got Motorola as sponsor on board.

As Robert Kis reported, the ‘League of Legends’ events are always sold out. “eSports is a global product,” stated Joakim Sandberg. “You won’t see any ads, you won’t see anything in any papers. That is the generation that doesn’t watch TV. They live their life in social media. We are waiting forFacebook, Amazon and Apple to step into this world.”