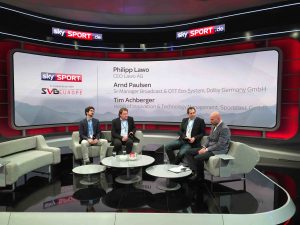 Innovative technical solutions for audio production can improve the quality of sports events such as soccer, rugby and American football and provide fans with a better experience.

For the 2017/18 English Premier League season, viewers can enjoy all matches in 4K UHD with Dolby Atmos so that they really feel as if they are in the middle of the action. While Dolby Atmos sound systems are installed in more than 3,200 cinemas worldwide, the state-of-the-art sound technology that places and moves sound all around the audience is not implemented in German Bundesliga matches yet.

“We already did a Bundesliga test case,” said Arnd Paulsen, Senior Manager Broadcast & OTT Eco-System Dolby Germany, at the Sky Sport Summit at Sky Deutschland’s Munich headquarters on Thursday March 22. “We believe that this is an issue that we need to approach. It is not necessary to have a ceiling-mounted loud speaker. There are millions of devices that support Dolby Atmos such as computers, tablets and the new Samsung Galaxy S9. The accessibility to immersive audio is becoming easier and affordable. In the future, we will have 3D audio at all devices such as smart phones.” Technically, all Bundesliga matches could be transmitted in Dolby Atmos because the workflows are already there.

For Philipp Lawo, CEO Lawo AG, the future of audio is not limited to immersive sound. With KICK, Lawo created an automated close ball mixing control application that delivers object-based audio. When interfaced with modern image analysis and tracking systems, KICK creates an algorithm in real-time and analyses where are the important points of interest at the pitch.

“On the basis of algorithms the system, for example, can spot a foul due to a mass confrontation of the players and the referee so that certain positions can be accentuated and the sound mixing is created automatically,” said Lawo. KICK takes away the basic workload for the sound engineer by chasing a ball over 90 minutes and proves consistent mixing. “This is the audio of the future,” underlined the Lawo CEO. “The Bundesliga chose it because of the quality improvement in audio.”

Lawo KICK had already been tested during a relegation game in 2015. Meanwhile, the application is used in all games of the First Bundesliga. “We equipped all our service providers with the respective hardware and software and trained the sound engineers,” said Tim Achberger, Head of Innovation & Technology Management, Sportcast. “The hardware is installed in all stadiums.”

The application will also be used at various other huge sports events such as the 2018 FIFA World Cup Russia. “The attraction is that the audio mixing is made with a clean object which is isolated produced in a high quality and is becoming part of the final mixing when the commentary is added”, explained Philipp Lawo. “It even offers the possibility to create a personal mixing with various objects.” Clean objects also make sure that there are no interferences, phasing and effects in the audio signal.

“We realized that this system has a big potential because it takes the pressure of the sound engineer. Thanks to the assistance by the automated sound mixing which is created by the software, he can concentrate on the overall sound experience”, said Achberger. The optimised work of the sound engineer and the better quality of the signal is added value. “We also like the Dolby Atmos sound experience but we don’t have included it in our service package at the moment.”

Next generation audio enables a variety of new possibilities such as to offer several commentators or to crank up a commentary if the viewer is hard of hearing. It also becomes possible to shut off the commentary and, instead, to add local sources like a buddy via skype. “This is not the end of the story yet”, remarked Philipp Lawo. “There will be a lot of creativity come up. Particularly in sports, we can transmit the content in different forms from the multi commentator solution up to various storytelling formats.”

It is also an issue if the comments of the referee and the trainer should be heard. “We already expanded our standard set-up for microphones from 12 to 17,” stressed Achberger,.“We are talking to marketing experts but we also have to discuss with the clubs what makes sense.” Last not but least it is also a legal subject if the viewers should hear the heartbeat of a driver at a motor race. “It is an advantage to establish a closer connection to the fans. This may be made affordable by getting a sponsor or selling it as an added benefit,” he said.

On May 8 and 9, between the 33rd and 34th matchday, the Bundesliga and its affiliated companies will demonstrate several live cases at three matches. Besides broadcasting applications there are further subjects on the agenda such as stadium experience and virtual advertising. The matches will be produced in UHD/HDR and the leagues will also see what kind of new camera systems can be used besides the standard set up with 21 cameras, Spidercam and Polecam. Meanwhile Lawo and Dolby will present where the future of audio is heading. “We will come up with a surprise,” said the Lawo CEO.