Behind the scenes: Sky Sports passes agility test with revamped studios and sets

This year, Sky Sports completely rebranded and re-packaged its channels, ranging from how they looked to how they are sold. This included all the on-air graphics, colour coding for different sports, and even the font it used for text, with each sport having its own bespoke typeface. In line with this Sky Sports 2.0, it revamped its three main studios and sets, to give them a new, fresh, up-to-date look.

“What we wanted to do is create a really agile and flexible set that could be used in many different ways for different sports – a set that didn’t have to constantly change all the time,” said Duncan East, Head of Directors, Sky Sports, who looks after all of the creative output (including graphics and sets) and manages all of the studio and OB directors.

Studio 3 went live in early August, with Studio 1 on air a couple of weeks later. “We put ourselves under pressure to deliver a lot of technology in new sets in a short period of time, but we’ve definitely succeeded,” stated East.

Its traditional way of working, as with most broadcasters, was to design a set for a particular show, build it, use it, strike it, then bring in a new set for another show. “The man hours that go into that are remarkable, so we wanted to come up with something that was a bit more flexible, that stayed in situ but could look, and change, the way we wanted it to, to stay fresh on air,” he explained.

They gave that brief to Jago Design – “they’d done a wonderful job on the Sky Sports News set, which still looks bright and fresh” after four years in use.

Jago Design created the main set in Studio 1, with a smaller version in Studio 3 (Studio 2 is dedicated to golf). “Construction of Studios 1 and 3 was undertaken by Scena, Studio 2 constructed by an in-house team,” added Mike Ruddell, Sky Sports’ Head of Technology.

Studio 1 is predominately used for football, going live every day, including a nightly (10pm) debate show, and its main weekend presentations, as well as numerous recorded shows.

The best way to quickly achieve different looks for all those shows was to use multiple screens and readily changeable lighting colours. There are seven large screens in Studio 1, including three very large LED screens, two displays made up of three big portrait-mounted, bezel-less LCD HD screens put together, plus two big LCDs mounted in what East calls ‘Toblerones’ – movable units that bookend the main presentation area for the flagship Monday Night Football (MNF) show or can be re-positioned quickly to create more intimate areas or different shooting angles. 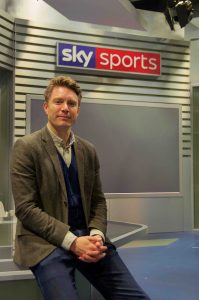 Duncan East: “We’ve utilised what we’ve got cleverly” as part of a smarter way of working

Ideally, all of the screens would have been LED, but they are expensive. “Also, we didn’t want to just put in screens for the sake of it – because you’ve got to fill them,” meaning the creative team have to devise graphics and create windows in to the event they are covering – “which is a challenge in itself,” said East.

The LEDs were made by Unilumin in China and imported and installed for Sky by Shooting Partners. “Our long-standing partnership with SP on all aspects of in-set display technology paid dividends again on this project. Once they were briefed and understood our requirements, we were confident to let them make product recommendations without Sky having to undergo months of product evaluation and testing,” explained Ruddell.

“LED used in broadcast studios has a very different set of requirements for that used in outdoor and retail display — viewing angle, definition, colour depth and accuracy, etc. Shooting Partners understand this well and work closely with manufacturers to achieve our specification.”

The cost of LED screens largely depends on pixel pitch. “With a fixed budget for screens we chose to put the higher resolution (1.6mm) LED where it would work best. In this case into the only 16:9 LED in the studio,” said Ruddell.

“During MNF the presenters stand pretty close to this screen and for any given lens focal length and camera to subject distance we would risk moiré patterning appearing. The finer pixel pitch reduces this risk, but to play doubly safe a very light layer of fabric diffusion was stretched across the screen. Other LEDs were seen as less critical once we knew Duncan’s shooting plan so a 2.4mm version could be used elsewhere,” he said.

Having been a director, East knows how difficult it is to drive a live show and control multiple screens at the same time – “you’re asking a lot of your vision mixer” – which is why Sky Sports turned to Viz Multiplay, which offers multiscreen studio control for sending content quickly to multiple screens, with up to eight simultaneous HD outputs from a single Viz Engine.

“Without Multiplay, I’m not sure what we wanted to do would have been achievable,” he said, “because we would have had to create bespoke graphics for each individual screen.” Instead, it can re-size and re-format content for each display (not all of which are 16:9 or landscape). “We’ve made it hard for ourselves in order to make a visually striking set, but it has been made possible by using Multiplay to drive the screens.”

They have unleashed its capabilities slowly, as they got used to it and more vision mixers were trained 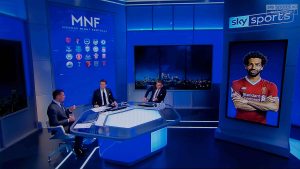 to use it, but now do animations and change graphics on the fly on more than one screen at a time. “It’s still developing, but we’re getting braver with it,” said East. It is now used on all of its studio-based programmes.

“It’s always an exciting challenge when a manufacturer states ‘nobody ever tried that before’, and that was the case with Multiplay,” added Ruddell. “Although it’s designed to drive images across multiple screens they are all intended to be of the same size, aspect and resolution. In our case every screen is different so Viz, our in-house engineering team and SP came up with a cunning system of downstream processing to scale and stitch Multiplay outputs to feed the screens. Of course, this also had to incorporate a way to switch to backups in case of failures but without becoming too complex and unwieldy.”

Sky Deutschland is also using Viz Multiplay for its new sports set, and the two broadcasters have been working together on getting it up and running.

On Monday Night Football it uses its largest LED screen as a virtual window (tied in to Ncam on a jib) with a good deal of interactivity, to allow the presenter to animate virtual players in the studio and then fire those players back through the window on to the pitch. The system also works in conjunction with a large touchscreen table, which many of the presenters and guests find more comfortable to interact with than the usual touchscreen. This is mirrored on another large LED, so that they don’t always have to cut away to the overhead shot.

One of the Toblerone displays can also be swung from portrait to landscape mode as a touchscreen. Indeed, some shows, particularly for online, are just that single touchscreen with one camera. “That is the whole idea of this studio. It can be used for the biggest production we’ve got [MNF], with six cameras, two touchscreens, virtual windows, or a really simple one-plus-one stood next to a screen,” said East.

Studio 3 isn’t big enough to have one of the movable Toblerone units, but it does have its own neat built-in touchscreen unit that fits into the set as a portrait display, but comes out of the wall, rotating automatically, to become a landscape touchscreen. “It is one of my favourite parts of both sets, because you’d never know it could do that, until, at the touch of a button, it does” – as has been seen in shot on its NFL show.

Zen and the art of putting

One main design element is the light boxes surrounding the screens, which adapt instantly to different programmes as they change colour (blue for Premier League football, red for Football League, etc.). Add this to changing all the displays using Viz Multiplay, and swapping out a desk and chairs, “and you’ve got a completely different looking set within seconds,” said East.

“Now, because of this flexibility, we can record three, four programmes in a day in here,” as well as going live in the evening, with each studio instantly switchable between the eight galleries.

The new golf studio has also undergone a revamp, adding the Zen Green Stage putting mat, “a fantastic bit of kit which allows you to recreate putts from anywhere if you input the contours of the green – it actually moves to create the bumps and ridges and slopes,” said East.

“Over time we aim for this kit to be tightly integrated with other elements of the ‘Shot Centre’ to give us the most advanced broadcast golf simulator you’re likely to find anywhere,” added Ruddell.

A smarter way of working

One of the elements they looked at in designing the revamp was whether to continue with greenscreen/virtual studio segments, as previously used for Monday Night Football for team news and analysis. “We made the decision to go away from that because we’d gone as far as we could with it. We’d got to a crossroads where we could continue doing what we were doing, but for me there weren’t enough improvements visually.” 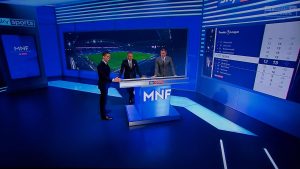 Boys in Blue: Monday Night Football presenter and guests at the touchscreen table with large landscape LED screens on either side

Although viewers liked it and it offered flexibility in changing backgrounds quickly, it seemed to be stagnating. “We’d caught up with the technology, which wasn’t getting any better,” especially compared to what many viewers are used to on games consoles. “I’m not so sure the viewer was as impressed as we were in the business. We were putting a lot of time, money and effort in to creating something that had a small impact on the customer, and we had to decide where our money was best spent,” said East.

“I believe moving to a simpler form of augmented graphics was the right decision for this project, but don’t think the high-end VR/AR studio is dead as a concept,” added Ruddell. “The broadcast graphics market is making great strides in integrations with gaming engines such as Unreal and Unity and I don’t believe its long before this sort of setup can be deployed to really blow people away without the high production overheads it used to impose.”

The studios have been designed for HD rather than upgrading to UHD, because there are no committed plans yet for the presentation elements of Sky’s football coverage to switch to UHD. “Elements of Sky Studios infrastructure are ‘UHD ready’ but for this project there was no requirement,” explained Ruddell. Besides, “ten weeks end-to-end for this project was a squeeze, UHD could have been a push too far.”

“This was a fantastic team effort to deliver a complex project against time and cost constraints while not just equalling but creatively exceeding expectations,” agreed Ruddell. “Aside from the set, our Graphics and Data team and broadcast engineers really went the extra mile to deliver.”

Boys in Blue: Monday Night Football presenter and guests at the touchscreen table with large landscape LED screens on either side