Sky VR: ‘A smash-up between gaming, internet and broadcast’ 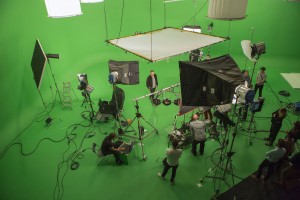 José Mourinho’s fêted encounter with Chelsea fans, his first since leaving the club as manager last December, was captured in intimate glory in virtual reality. For Sunday’s match with Manchester United at Stamford Bridge, Sky fielded multiple VR rigs. The filming followed a test run during the Chelsea versus Leicester City game on October 15 and will feature in a VR documentary being made by Sky VR in association with the Premier League and destined for the Sky VR app around Christmas.

Sky VR is also hoping to continue its up close and personal relationship with British heavyweight Anthony Joshua at his upcoming world title fight with Wladimir Klitschko (recently delayed until 2017 due to a Klitschko injury).

The boxer’s last bout with Charles Martin was also filmed by Sky VR. “Of all the sport’s we’ve shot, the footage of him is my favourite,” says Richard Nockles, creative director at Sky VR. “We’d like to create a really intimate piece about him. We’re crossing our fingers that the request [to film] will be approved.”

During April’s clash with Martin, Joshua delivered the punch which floored the American in the 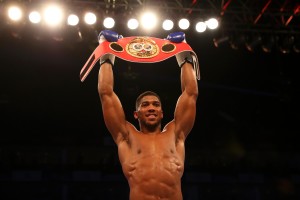 LONDON, ENGLAND – APRIL 09: Anthony Joshua of England celebrates with the belt after defeating Charles Martin of the United States in action during the IBF World Heavyweight title fight at The O2 Arena on April 9, 2016 in London, England. (Photo by Richard Heathcote/Getty Images)

corner where Sky’s VR team happened to be. It’s the kind of luck needed in sports coverage, but was only possible because of a lightweight Steadicam used by Nockles’ team.

“We used gyro-stabilised carbon fibre poles to float a camera next to Anthony Joshua,” says Nockles. “We were able to walk with him into the ring which, from a viewer’s perspective, is nothing short of magical.”

Similar systems were used at Chelsea. “We’re trying to capture what it’s like to go to a Premier League game and transport viewers into the heart of it. When done well VR can blow people away.”

Evolution of a VR vision

Nockles has been working in the medium for six years, setting up Surround Vision, a full service VR/360 production company in 2013 based in Shoreditch and seconded since February to Sky to help the broadcaster shape the output from its in-house 10-person production unit, Sky VR Studio. It’s a period of experimentation which has seen Sky VR trial VOD and live streams at events including soccer, cycling and boxing.

“Before Sky, I’d always been on the sidelines of major events, even working for major brands in the ad industry, but now we have access to some of the biggest sports events in the world,” he says. “We have the luxury of taking that access to find ways of creating something truly dynamic, going over the barriers and the taking audience right into the heart of sport.”

With Sky VR he has made two F1 VR experiences produced with Formula One Management and Williams Martini Racing. Each a couple minutes long, they ran on Facebook, taking viewers into the pit lane, team garages and out onto the track. Each generated 2.5 million views apiece.

Most of Nockles’ work is focused on short form VOD, but he is also working with Sky’s tests of live VR streaming.

“When shooting live the majority of camera positions will be cabled because of the need to return feeds from the camera back out to the cloud,” he says. “We’ve still yet to really see a robust wireless live solution for live 360.”

While certain sports, like boxing, lend themselves to the greater intimacy which VR promises, Nockles acknowledges that this is trickier covering sports with a large field of play.

“The intimacy is lost but your motivation for viewing is different,” he says. “Most football fans go to watch a game of chess happening in front of them. When I go see Manchester City I love watching the movement across the entire pitch on and off the ball. A lot of the time you can’t see that the way soccer is conventionally covered but with VR you can.”

Sky is experimenting with a live solution where viewers are able to play with content by “pushing in” to a feed and switching from 360 to traditional feeds. “This becomes more of a playful experience,” says Nockles. “It’s all about testing to see how audiences like to engage.”

That’s important because the more engaged the viewer is the more likely they will want to spend longer in the experience. Just now videos of 2-5 minutes are optimal, though this is also a function of uncomfortable headgear.

“The weight of the first generation headsets is a problem,” he suggests. “Sony PS4 VR is a better design since it places the weight of the goggles on the head rather than the face.

“I bet if we look back even a year from now we’ll be laughing at the size of headsets. VR will develop like the mobile phone industry – we’ll quickly get smaller headgear with sharper, crisper screens.” 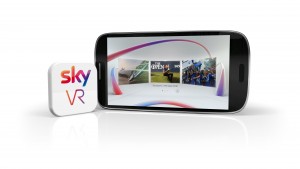 Although Sky is an investor in VR camera developer Jaunt, Nockles says he is agnostic about kit, and is able to use “whatever is going to do the best job”. His personal preference is for smaller cameras which have less impact on the scene itself.

“If I can stash a camera so that no-one can see it means I can get into the heart of the action. Ideally the industry will develop cameras that are as small and as unobtrusive as the microphones placed in front of speakers at a press conference. That’s how close we need to be.”

Sky VR uses the Adobe Creative Cloud for editing and GoPro’s Kolor for stitching, although Nockles is also open to using tools from The Foundry and others. He prefers to work in mono rather than stereo largely because 3D doubles the workflow and production costs.

“Part of my role is to analyse the costs involved in a job, asking whether it’s worth doubling the effort to get a wow factor and engagement. There are some excellent examples of 3D and there’s a lot of effort being invested in both styles. There is no right or wrong way – it depends on the creative direction of each project.”

For VOD content Nockles is combining conventional static and moving camera shots typically filmed using ceiling- or floor-mounted positions with floating Steadicam shots for more dynamic movement. The team has used zip lines to propel a VR camera alongside action and put 360-cams on drones, notably covering the build up to this year’s Tour de France.

Live presents added difficulties, notably in avoiding motion sickness for viewers watching fast action. Putting VR cams on F1 cars as they corner at 150mph is one such red flag.

“I would absolutely love to see drone racing (a sport which Sky plans to broadcast) in VR but we have to work out how to make that safe for the viewer,” says Nockles. “We are trying to push the boundaries of content production at the same time as creating safe VR. Perhaps we can run a series of ziplines alongside the drones?”

Graphics are another huge asset in VR “for transitions and overlays, for social media interaction and as a way to hide the crew,” he says. “There will be a huge smash-up between gaming and the worlds of internet and broadcast. Augmented reality will be a part of this experience.”