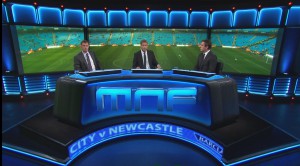 Sky’s coverage of the latest Premier League season has occasioned several notable technical developments for the British-based broadcaster, including the incorporation of the ChyronHego TRACAB real-time player tracking solution, the addition of small compact VistaCams (also developed by ChyronHego) for picture stitching, and the transition to a fully tapeless workflow.

1) TRACAB: “The ChyronHego TRACAB system has been deployed by the Premier League for the purposes of obtaining statistics and data, but given enhancements in order to generate live analytical graphics on replay. We work quite closely with ChyronHego, and one of the benefits of that is that they have developed a system to allow us to identify a clip and then effectively output the tracking and graphical data for that clip using TRACAB. 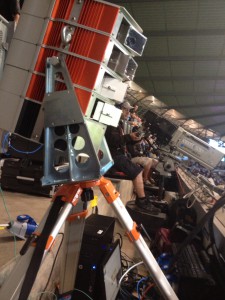 “We’re very much at the cutting edge with this one and are still refining our use of the system. Lots of systems in the past would rely on a certain number of pre-rendering times, do a clip and then render it for playout. What we are trying to do is render the graphics in real-time over a camera feed or first replay.

“We are using the system on the main Sunday and Monday night games as much as we can. From our point of view, and from ChyronHego’s, we have got good feedback about possible improvements and now have a little time for further refinements before we come back with the next round of coverage on 15/16 September.”

2) VISTACAM: “We have also been working with ChyronHego to produce VistaCam, a set of small cameras that allows us to get a stitched panoramic view of the pitch for incorporation into our Monday night football coverage. Basically, we have four cameras looking at the pitch and then electronically stitch them together..  Each of the 4 cameras is individually transported back to Sky as an IP stream, back at base the streams are decoded and rendered into a stitched panorama which can be displayed as a live vista on our studio display systems, where it can adjusted to be positioned correctly on the screen.

“The challenge for ChyronHego and ourselves is that a lot of gantries in Premier League clubs are often very, very tight for space. We’re still learning about camera positions in terms of venues, but so far, so good.”

3) TAPELESS: “We are now completely tapeless on site this year in that there are no specific tape decks for Sky Sports, although there are some to allow for any third party broadcasters who may need tape. Practical benefits to going tapeless include the amount of time taken at the end of each show to do a clip dump being reduced, allowing the trucks to get away quicker.

“Confidence in the move to tapeless had been building up for some time; confidence both in the system and in the APs and the production team, that they were happy that all the clips were good and reliable. By the time we got to the end of last season, it was fairly obvious that everyone was comfortable with the move towards a fully tapeless environment – and I am glad to report that all is going well so far.”