Patricia G. Hopkins, corporate VP marketing at SMT, commented: “With SMT’s expansion of its European presence to include Germany, becoming an SVG Europe Gold Sponsor is the ideal way to target our partners and clients in the region. We are excited to work with SVG Europe’s editorial team to share news of product launches and our growing range of innovative tracking, event and broadcast technology.” 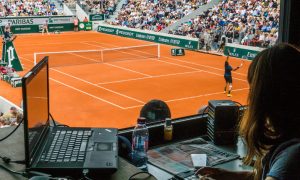 SMT has enjoyed a significant business presence in Europe for many years supporting premier events such as Wimbledon, Roland-Garros, the Open Championship, the Ryder Cup, and the Tour De France. SMT’s growing business with European football leagues, governing bodies and broadcasters will be enriched by SMT having a physical presence in Europe.

SMT’s virtual offside line system (SMT-VOL), built on the foundation of 20 years of SMT’s award-winning and patented American football virtual line technology, has been chosen by the Primeira Liga of the Portuguese Football Federation (FPF) for use during the 2019/20 season. SMT-VOL is currently being evaluated by several other European-based football governing bodies, leagues and clients, including Spain’s La Liga, Germany’s Bundesliga, and broadcaster MediaPRO.