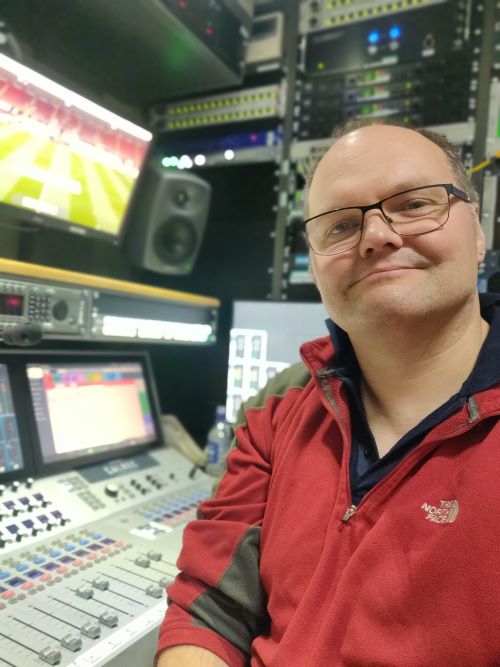 Neville Hooper is deputy head of sound at NEP, one of the biggest jobs in broadcast audio. He must ensure top quality delivery of primetime sports for a variety of high-profile network clients with equally high-profile broadcast rights.

Hooper is an active member of SVG Europe and can be spotted getting stuck in at most of our audio events. Moreover, right from his teenage years, Hooper has always been a sound guy.

Graduating from Solent University having made an early start in bands and touring after finishing school, Hooper says: “I did have a choice. One of the bands I was in could have had a bit of success, but I knew it wouldn’t have been for long. I also had a look at studying popular music and recording at university, but in the end I took a last minute opportunity to join a new broadcast course. It was one of those happy accidents; I’ve had a long and happy career.”

There was a defining moment during his studies, when Hooper got a chance to ride along on a couple of jobs with a BBC OB unit out of Kendal Avenue. “That confirmed it for me. I thought ‘this is what I’d like to do’.”

After his studies, Hooper got a job with Global in the UK, which was created from the OB properties of Yorkshire, Anglia, and Thames Television, and subsequently merged with Visions in 2000.

“At its heart, great audio engineering is creative and it’s nice to see young people coming through from a variety of different fields”

He had several roles at Visions, but possibly the biggest thus far came when Visions won the Premier League contract with Sky in 2001, prompting the build of a new truck and the refurbishment of another. Hooper became the main guarantee engineer on that project.

Since then, he has specialised in football coverage, including the Premier League for Sky, and as host broadcaster on a number of Champions League finals.

He notes: “I was the lead audio engineer on the Wembley Champions League finals in 2011 and 2013 for Sky and for ITV. I also did host broadcast at the 2006 world cup. We covered the Gelsenkirchen and Dortmund stadiums there.”

Being the host broadcaster for any event is a high-pressure situation, but for Hooper and for NEP, it is an opportunity to push standards further. “We like to set the benchmark high,” he says. “We go to a lot of events where there are other host broadcasters, and we know what we like and what we don’t. At Wembley in 2011 our aim was to make ours the best host broadcast we’d ever seen. So, for example, we had spoken idents on every audio source and picture idents on every video source; that was in the days with MADI and so on. Of course, now with things like the JoeCo devices, that’s relatively straight forward. Hopefully, we set the standard for future events; we do try and go the extra mile to deliver the best service we can.”

“When we went from discreet audio routers to embedded routers, that was massive change and cut the amount of cable we needed by half. The next big step is losing the router completely”

NEP has a set of carefully crafted core values that guide its services, which Hooper says is part of what makes the NEP worldwide offering so attractive. The same level of service can be expected wherever you go to any of around 100 offices and bases in 21 countries and counting. “We see ourselves giving the top end offering,” he says. “To innovate and develop wherever possible, and practical.”

These days, Hooper has less time on the road and delegates more events, collaborating with other senior engineers at NEP. “There’s myself, Stuart Cruice, and Rob Jackson,” says Hooper. “Stuart is delivering the Olympics for Discovery, so he will be off to Japan for nine weeks at the beginning of June. We’re deploying four trucks to the Euros, and for that I’ve handed over responsibility to one of the guarantee engineers on that; he’s one of our rising stars and has done a brilliant job.”

Again, NEP puts effort into giving new talent responsibility and the opportunity to grow. According to Hooper, that is one of the things that keeps the craft alive in the face of so much technological upheaval.

“At its heart, great audio engineering is creative and it’s nice to see young people coming through from a variety of different fields. People who have grown up with the new generation of technologies are coming through and are extremely comfortable with it; but in the end, a microphone is still a microphone and it’s still analogue. You cannot forget about first principles. If a mic’s buzzing, you need to be able to deal with it.

Interestingly, of all the emerging technologies and recent advances, Hooper sees networking as possibly the most significant shift in recent times, and in particular the move to SMPTE 2110 and NEP’s move to using the Dante audio networking protocol.

“Everything is moving to a network-based environment. We had a dabble in Dante, and found it to be virtually bomb-proof, so we stuck with it and invested in more and more Dante kit. That paid dividends when it came to post lockdown football, for example. All the commentary on the Premier League for Sky has been done with Dante for a couple of seasons now, and it’s worked very well.

“It’s interesting; I had a discussion recently about how we can move things forward, and I think there are limitations that even now we still accept that we don’t have to live with anymore thanks to networking. A broadcast ends up being one big network with everything just sat on it and everyone taking and giving what they need to. That’s the Nirvana. When we went from discreet audio routers to embedded routers, that was massive change and cut the amount of cable we needed by half. The next big step is losing the router completely.”

The recent trend to remote working and operation, whether through considered long term plans or because COVID has forced the issue, has provoked much discussion at SVG Europe. Hooper recently took part in SVG Europe’s Sound Talks: Mixing Broadcast Sound event where guests discussed that very thing, and were watched by a packed audience.

“At the moment, I don’t see benefit in doing the high-profile events remotely, like Wimbledon or even the Euro,” notes Hooper. “I think where remote has its place is in regular, repeat contract work. It also depends on our clients. Sky, for example, has invested heavily in their remote facilities and I think it was a direction they always wanted to go in anyway.

“Remote working can be several different things, too. For Sky, we gather sources and deliver them to the remote facility, where the programme is mixed. Another way is to remote control facilities in the OB truck. Both methods require fewer people on site and a smaller footprint, so then it’s just what works for the individual client.”

Whether some remote productions return to their previous ways post-COVID is another matter, and again, according to Hooper, it depends on the production. “When the COVID lockdown hit, we went remote with the ITV horse racing very quickly, with production staff and presenters working from home. It was only the horses on site! But actually, that’s returning to a more traditional OB model again as things settle down and restrictions have eased.

“I’m not sure where it’s all going to settle, but remote working is definitely not going away.”