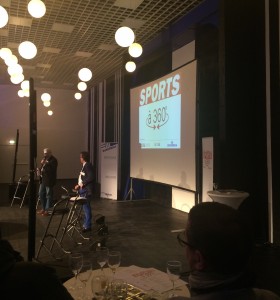 The Euromedia/SVG Europe event in Paris on 22 March examined a host of technological changes set to impact the French market.

Held on March 22 in Saint-Denis, Paris, the Sports à 360° event organised by Euromedia in association with SVG Europe provided an opportunity for the 80 attendees to get to grips with the latest technology in sport, most specifically in France, through a series of discussions and round-tables featuring high-ranking professionals from the world of sport.

Mini-cameras, data capture, virtual reality and video refereeing were the topics discussed, demonstrating that sport really pushes the boundaries when it comes to novel ways of ensuring TV viewer engagement.

Moderated by Matthieu Skrzypniak, innovation manager at Euromedia and Ronald Meyvish, CTO of the Euro Media Group, the event was a first for the leading European service provider. The number of attendees and the breadth of the topics examined conspired to make it a success.

Lionel Vialaneix, president of Euromedia France, first took to the floor to introduce the event and remind the audience of Euromedia’s dedication to covering sport everywhere in the world, as well as highlight recent changes inside the company. “Euromedia is investing massively in new technology. We are renewing all our cameras over the next three years and alongside our A21, C18 and C42 OB trucks, currently on the road, we will be launching the B40, the C25’s smaller brother. We have also created a new service, Innovations et Technologie, headed by Matthieu Skrzypniak, who has a dedicated team, alongside a new management unit, Direction du Développement et des Opérations,” he said.

Skrzypniak also revealed that French pubcaster France Télévisions had renewed its five-year contract with the company, during a particularly busy year for the group as a whole. “We will be covering the Tour de France for France Télévisions this summer, which will be sharing some of the limelight with the EURO 2016 [championships]. UEFA has chosen us as one of the OB partners during the event, which we are really pleased about. We will also be putting a big infrastructure in place for the Olympic Games, including 14 OB trucks, among which four are for France, [as well as] two planes, a number of helicopters, seven motorbikes and around 60 technicians from the group,” he said.

The first debate on mini-cams looked at whether the quality problems related to such cameras were offset by being close to the action. Laurent Daum, an experienced rugby director for Canal+, shared his views on ref-cams, which have been used during rugby games in France for a number of years. “It’s a good supplement to the microphone, but the technology is slightly limited because the camera has to be fixed onto the referee’s chest, which is not the best part of the body from which to get a view of the game. We have carried out some tests with cameras fixed to the referee’s head and the results were great. But safety issues remain a concern and quite a few referees are reticent about wearing cameras at eye level.”

There was a global consensus among the members of the panel on wanting to achieve live drone shots during a sport event, despite very restrictive regulations which make it virtually impossible. Michaël Gisselere, a director at Freeway Drone, revealed that there would most probably be live drone shots of the Tour de France this summer. “You have to work very hard to get the authorisations but live drone coverage is feasible. It’s not like that with most other sports; a lot of the smaller federations are very conservative about using the technology and the current climate does not help,” he admitted.

The company uses both Panasonic GH4 cameras and 5D Mark 3 cameras. “A lot of the drone coverage is done three months before the Tour, and the images have to be acceptable enough because they are mixed live with images from the ground cameras,” he explained.

The panellists also broached the subject of smartphone coverage, as the image quality of these handheld devices is constantly improving. According to Olivier Georges from Horus, a company which specialises in embedded camera technology: “The day we will capture a whole sporting event with a smartphone is somewhere on the near horizon. The stabilising technology inside the phones is getting better, plus you can use all the added sporting data and that is great for second screen applications. The only real problem is the rights issue.”

The relevance of captation data was much discussed during the second debate. According to Axel de Charentenay, the president and founder of French consultancy ACSE: “Enriched content increases the drama of sport, and as the time spent on second screens by people in France is expanding rapidly, there is a real requirement for the live airing of data during a sport competition. It can give you a more precise picture than what you get from the commentary, especially on an event which goes on for several hours and is covered live, like the Tour de France.”

Eurosport chief deputy editor of cycling events Laurence Schirrecker-Mothes agreed: “I think captation data can enrich any sport, but you have to use it in the right way. Too much of it can put the viewer off, and there are times when the emotion of the sport must take over. It’s also an interesting tool to use in a post-competition analysis, and of course for digital and second screen applications.”

According to Guillaume Chelius from Hikob, a company specialising in smart wireless sensor technology, some issues still have to be dealt with. “There can be a reliability problem, especially if the competition takes place in areas where there are plenty of frequencies.”

Virtual reality generated a major buzz at the recent CES show in Las Vegas, and is a technology that seems to be on everybody’s lips these days. It also gave rise to a lot of interest during the third discussion at Sports à 360°. Richard Ollier from French VR technology company Giroptic launched a 360 HDCam on kickstarter in 2014, for which there are already 4000 customer orders. Understandably, he has strong opinions on the subject: “I believe we are at the beginning of a revolution; everything will be filmed in 360° tomorrow and we will watch everything that way as well. The cameraman’s job, when it amounts to giving us his chosen point of view of an event, is one of the past.”

Some concerns were voiced regarding the headset equipment, which according to Euromedia Group CTO Ronald Meyvish could be difficult to wear for long periods of time.

Emmanuelle Roger from Euromedia subsidiary Netco, which among other things develops virtual reality and 3D applications for the smartphone and other screens, brushed the concern aside: “I personally find the headsets not too heavy and quite comfortable to wear. We have brought an example with us today for people to try out. I think it is possible to watch an entire programme in that way, not just a few minutes of it.”

Richard Ollier agreed: “A lot of effort has gone into making the technology comfortable for the viewer, contrary to what happened with 3D.”

Head of innovations at France Télévisions Bernard Fontaine, who tested Gyroptic’s technology at last year’s Roland Garros, is cautiously optimistic. “There is a big public interest in VR that we witnessed at Roland Garros,” he remarked. “But there are still huge hurdles to overcome. For instance, for a broadcaster like us where do you put your programme logo in a 360° environment? And a lot of the 360° cameras on the market today are made by what one could describe as artisans, with still so many technology issues to resolve. [For example] many of the cameras are not waterproof, which is a big problem for live sport, or heat resistant, as we found out at Roland Garros. And in my view the comfort of the headsets needs to drastically improve. You can’t wear them for too long without reaching for the sick bag.”

The fourth and final debate on video referees highlighted a few interesting points, not least the nature of the game itself. “You can’t compare rugby to tennis or football. There is a risk that using such a technology for soccer matches could slow the game down,” said international football referee Joël Quiniou.

Horse-racing, most particularly trotting, is a sport where video referees are used as matter of course. “There is a lot of money at stake and the punters need to be sure of the result. And there is also a 30-minute delay between each race which gives the video referee enough time to be played,” explained Benoît Fabrega, head of international for Le Trot.

All participants agreed that video referees did not solve interpretation problems even if the technology does have the capacity to prevent major mistakes.