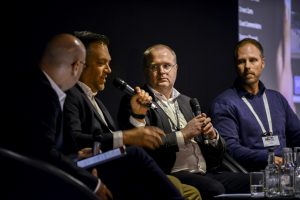 The session commenced with a short video from Net Insight illustrating their recent work with the Scandinavian Touring Car Championship (STCC) that revolved around Net Insight’s Sye solution and the STCC race in Stockholm, Sweden, in June 2017. Working with other partners including Lagardère Sports and Storyfire to create an immersive racing viewing experiences on mobile devices, Sye’s ability to deliver synchronised video feeds over OTT, with an ultra-low fixed delay, was integral to the STCC Live App.

The app developed for the STCC won a Bronze Award at connected TV event The Connies in May 2018, underlining what Gustafsson describes as the “game-changing” potential of OTT. “Now you have the possibility to be the driver or the passenger in the car,” he said. “You can have that complete adrenaline rush that comes from a [truly immersive] experience.”

The focus on achieving “harmonised OTT playout to a line with the broadcast feed being transmitted over TV” attests to the importance of minimal latency to successful OTT services. In fact, says Gustaffson, it is now possible to “lower the latency well below what broadcast latency is now, to 1.5 or 2 seconds.” For Net Insight, the approach taken revolves around the use of what Gustaffson terms “robust UDP” – User Data Protocol being an alternative communications protocol to TCP (Transmission Control Protocol) used primarily for establishing low-latency connections between internet applications.

Other panellists concurred that maintaining lowest-possible latency as services evolve is going to be integral to their success. Hughes observed that “for most clients the biggest thing is to combat latency and ensure as little buffering, as little latency as possible,” while Gustaffson highlighted “a bunch of studies that indicate if viewers get more than three ’spinning wheels’ they will leave that broadcast. It needs to be a broadcast-like quality experience that is being offered.”

But although considerable strides have clearly been made with regard to latency, broadcaster and service providers’ demands inevitably remain somewhat diffuse. Some expectations are commonplace – for example the need for multiple camera angles – but “ultimately different rights holders will have different feelings about what they want to show,” says Hughes. And that is going to be determined in large part by user engagement, “at which point [the rights holders] can see what viewers are latching onto or interacting with, and can use that information to enhance their own timelines.”

Whilst the quality of the stream is clearly non-negotiable – and requires meticulous planning regarding the management of, for example, peak concurrences – Hughes also pinpointed specific content-related issues such as graphics intelligibility. Hence it’s not necessarily a good idea to take “a big TV experience and [simply] push it down to mobile phones as the graphics could be rendered illegible.”

All panellists agreed that advertising support and increased personalisation are going to be crucial to the evolution of OTT services that satisfy a broad range of sports viewers. On the latter point, Bowley pointed to the addition of “quizzing, polling, close captions” to sports streaming services, highlighting Sixty’s own credentials as “a Software as a Service provider whose technology layer sits on top of the broadcast and pulls in all these elements. We don’t provide set templates for where the data should sit; [rather] we supply the technology to allow [broadcasters] to do whatever they want.”

Piracy is obviously a consideration for rights holders, especially with so many potential streams opening up all the time, although it is live viewing of pirated content that is most concerning. “Obviously there does need to be encryption and no one wants viewers watching pirated live content, but if someone does potentially unencrypt after the event and post on a YouTube-type site it is not necessarily regarded as being the end of the world,” said Gustafsson.

Industry-wide, there are understandably some differing opinions about the advent of micropayments that allow viewers to watch certain sections or even individual moments of a game. “There’s risk and reward there,” says Bowley, “in that it could impact bigger subscription models but could also engage viewers that would never subscribe anyway.”

The sessions wrapped up with a consideration of future developments, such as e-sport coverage on OTT services (“I think we are going to see some innovative mergers between e-sports and actual sports,” said Hughes), and the possible implementation of the AV1 open, royalty-free video coding format. “There is a great buzz around AV1,” acknowledged Gustafsson, but although he anticipates some interesting deployments taking place as soon as next year he reckons “full adoption is 5 or 6 years away”.