Sprinkle of gold dust: Behind the scenes at ITV Sport’s Euro 2020 virtual studio 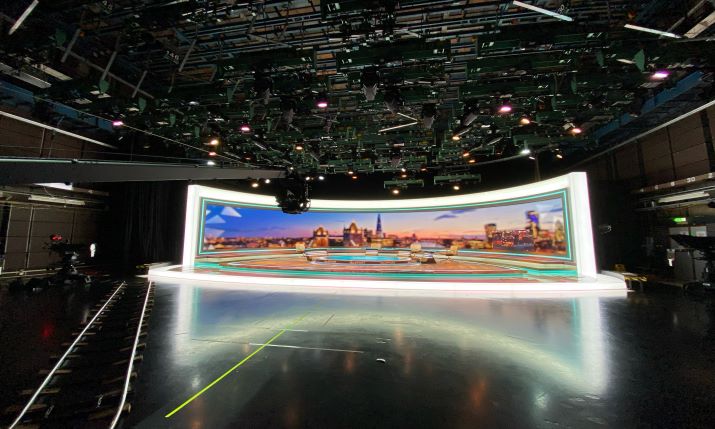 “When you don’t notice that it’s not real and the viewer has a really good experience, then we’ve done our job right,” says Paul McNamara, senior director and executive producer for major events at ITV Sport. “The trick is to make the set as real as possible and use the tech and the space appropriately.”

McNamara is responsible for ITV Sport’s UEFA Euro 2020 output, of which the centrepiece is a virtual studio from which the broadcaster presents match coverage, except those it is airing live from Wembley such as England’s group stage clashes with Scotland and the Czech Republic.

McNamara, a Bafta and RTS winner, is no stranger to virtual sets nor augmented reality (AR), which reached its last zenith during the 2018 World Cup from Russia where the undoubted star was the dramatic ‘cathedral’ studio in Red Square.

“When you go to Moscow and you have a studio position right in Red Square you want to see as much as possible,” he says, “but when we got there we could only see half of St Basil’s.

“When I wondered if there was a way we could see it all, our team managed to find a way (using camera tracking) to enable what was a small studio space with restricted height to look like a much larger dome and to see the full height of the cathedral.

“That was a real achievement and got a lot of publicity and proved that within a small space we could create a unique look.” 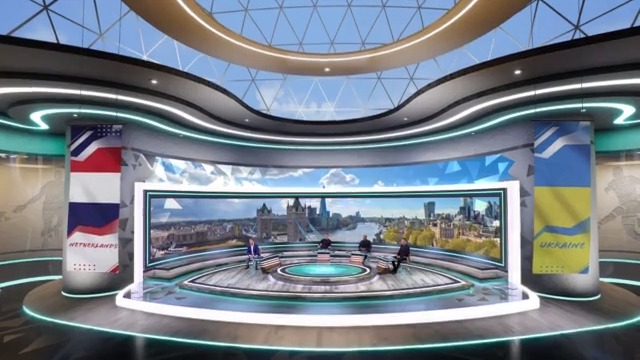 The pandemic inspired ITV Sport to build its studio in the UK, and in the most flexible manner possible so that it could react quickly to any changes Euro 2020 threw at it

Next up was UEFA Euro 2020, the concept for which went through a few iterations. For a start, the tournament was due to be based in 12 cities (11 in eventuality) which presented an initial conundrum for a presentation that would normally be built around the sights, sounds and cultural flavour of one country.

“The original plan was to base our studio in London since Wembley had the most games, including the semis and final,” McNamara says. “We planned the build in central London with a great view down the Thames.”

Then COVID struck, which has becoming a familiar punctuation point for these stories. “We didn’t know what state the country or indeed any country would be in, so when the tournament was cancelled for a year we opted to take studio space in order to be flexible with any outcome.”

That space, in Maidstone Studios’ 6,000 square foot Studio 2, 45 minutes outside London, is a regular host to ITV programmes (shortly to include ITV4’s Tour de France live programming made by Vsquared).

Arena Television has supplied and installed a purpose-built gallery from cameras, edit suites and recording equipment all supported by the IP core of Arena’s OBY truck parked outside the studio. 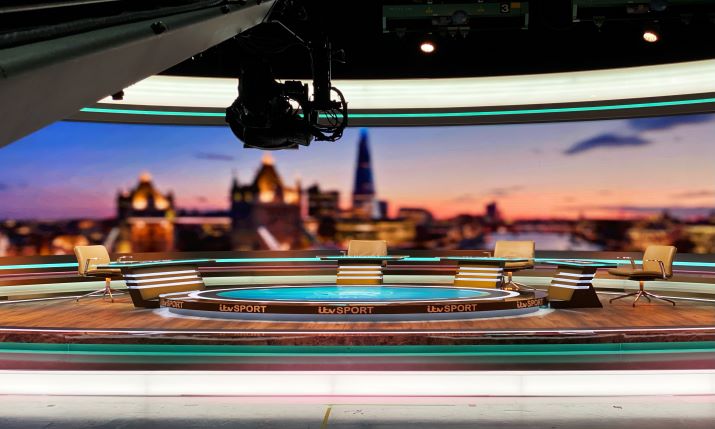 “Within the year of prep we mapped three to four different types of look and [those] three to four different projects evolved into what we have now,” he says. “Originally we wanted to be in every country. If a game is in Rome, let’s make the set ‘Rome’ but the pandemic prevented travel. We couldn’t get our team to the cities to film images that I thought would be good enough. I didn’t want to use stock shots. A lot of virtual studios look great on a wide angle but on the singles, stock shots can look pretty average.”

They then tried to simulate cityscapes virtually by animating them in the Unreal games engine, but these too were not up to scratch. “It looked like a video game and not really what I wanted for the background of shots,” McNamara says.

So, they reverted back to London. It still held the largest number of matches and McNamara’s thought was why hide the fact that ITV Sport was too in town. 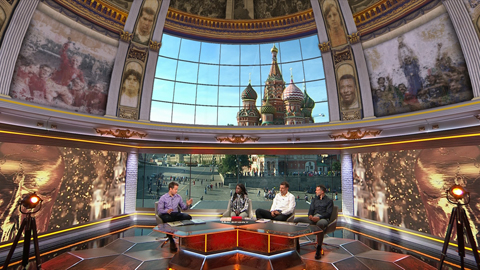 He tasked freelance cameraman Rob Whitworth to capture a variety of panoramic shots of the capital in 8K to be used as set backdrops. Whitworth specialises in time-lapse photography (he terms it flow motion) of cities including Singapore, Istanbul, Shanghai and Pyongyang.

Whitworth shot in London over different days, at different times, to reflect the times and weather conditions at which matches would take place.

McNamara explains: “He shot when it was hot so we have shots of sunshine across London, at golden hour when the sun is going down and at night for the highlights shows where we needed a darker studio aesthetic.”

Designer Paul Sudlow created the physical stage (just as he had done for Russia 2016) at Maidstone. This was Lidar scanned, translated into a digital 3D model and imported into Unreal Engine. In Unreal, virtual stage developers White Light used a disguise server to stitch (merge) the world of the physical set with a virtual world designed in Unreal by freelance creative director Kevin Cooney.

“The aim is to move between the real and the unreal worlds,” says McNamara. “It meant we could use the cityscapes we’d designed in Unreal by displaying them on the virtual video walls.” 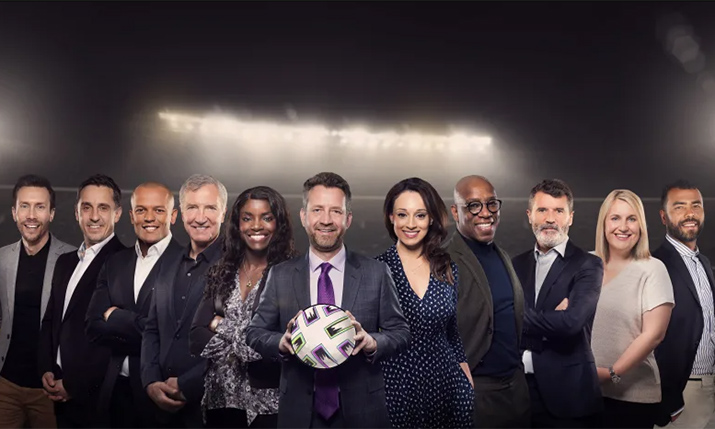 Marrying the real and the virtual

Lighting directors Chris Hollier and Andy Cottey have full control over both real and unreal environments. “Kevin gave us virtual surfaces that we could light in the Unreal world to match lighting in the studio and, conversely, when we create a sky in Unreal, we can have that seem to reflect on the floor of the studio.”

Still concerned with ensuring that the virtual backgrounds to the singles shot of presenter Mark Pougatch and pundits including Gary Neville would stand up to scrutiny, McNamara shot singles in the studio against a background and shared those with Whitworth.

“We took a lot of time on the singles of each guest. Rob was able to use those as reference when he filmed and White Light then stitched those into the model so that the singles are perfect as well.

“It’s a massive project unifying the real and the unreal. The goal is to not be able to see where the joins are.”

In many ways it is more like a light entertainment show than a sports programme, he says. “Vision mixing takes time to select a shot. When we go from camera one to cam two we need the background to change in sync.

“We mitigate this by spending a lot of time in prep. For a show beginning at 4pm we’d begin blocking moves at midday. It takes time, it’s quite technical and very different from what we do on a weekly basis.

“For example, when the jib operator zooms into the video wall or an AR graphic of Gareth Bale, they only see the full comp on a small monitor. In reality they are seeing nothing apart from the physical set, which consists of the rostrum and the physical screen behind the presenters.”

“Ultimately, it’s very much the sum of its parts,” he adds. “If the jib doesn’t get to the right point, if White Light don’t open the screen at the right time, if VT don’t run the city profiles, then it won’t work. To get it right everyone has to be very focussed on what they are doing.”

All the AR graphics are selected from within Unreal. Graphics include player profiles, group table, country banners and hero banners and floor maps.

“We can do anything we want to do. We can show the studio in a 360 and use a vistacam [the 180º 4K stadium feed from UEFA] to take viewer into the stadium. The possibilities are endless. The trick is not to over use it.

“We want to make viewers feel comfortable with where they are. My guide is to use AR at the right point, not about showing how clever we are. We will be in homes for a month, so we want to sprinkle our presentation with gold dust.”

UEFA Euro 2020 continues until 11 July in stadiums across Europe. ITV’s live coverage in the UK resumes on Sunday 27 June with the Netherlands vs Czech Republic.