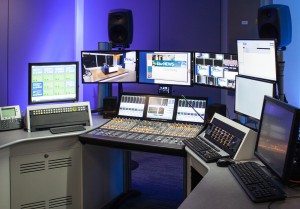 UK broadcaster ITV has been evolving its approach to regional news production and in turn has been remodeling its studios to embrace a flexible way of working. As part of this move, new facilities have been built in the Wales, Channel, Tyne Tees, Central, West Country, and Anglia ITV regions – all of which have SSL C10 HD Plus broadcast consoles in their sound studios.

The changes at ITV started with its people and the development of skillsets such that more staff are able to fulfil more roles.

Steve Teague, head of technical services for ITV News Group, explains: “We don’t have conventional roles any more… That’s not to say they don’t specialise or feel they’ve got one or two particular skills, but most people have a basic level of skill in all aspects of our production and workflow. Some people have ‘super-user’ knowledge, so if it was a question of re-configuring something we’d get the super-user in for that given area and they would do the work. I wouldn’t expect everybody to be able to reconfigure the sound desk from the ground up, but some people certainly could.”

Because of this approach, it was important to ITV that the newsroom technology could be configured to be as straight forward for the operator as possible, making ease of use a key requirement. Of course, it also had to be flexible enough that different levels of production complexity could be managed as necessary. For peak output the operator requirements are more demanding, but for off-peak it is necessary to switch workflow to accommodate fewer staff.

“There are fundamentally a number of positions that have to be filled to put a normal programme on air,” says Teague. “…Producer, technical direction, vision, sound, and so on. For early morning and late night bulletins, the sound operation can become a remote panel in the main gallery. The workflow is changed at that point.”

To make things more demanding, most of the new galleries have more than one output. For example, in the Central region there are East and West outputs. Normally one of those outputs is live and one is pre-recorded, though those can be opted in or out so there is also the option of switching to a single ‘pan-regional’ output when required. “It’s both quite intense and very flexible from that point of view. Not many galleries produce more than one output.”

Teague sums up the key aspects of the C10 console that make it well suited to the new ITV studios: “Reliability and ease of use,” he says. “People like the interface – the logical layout.” When asked about particular features he cites the console’s Automix and C-Play (spot and music playout) features: “Automix is great for when we have multiple guests, and C-Play has been very useful.”

Broadcast systems integrators IPE Systems was involved in the original facility ‘template’ design and was responsible for delivering the studios at the Tyne Tees, Central, West Country, and Anglia ITV regions, adapting the basic infrastructure requirements specifically for each one. “Each studio has a production control room, a sound control room, several edit suites, a news room, and a voice-over booth,” says Ray Bragg, director at IPE Systems. “One of the key features of the studios is the tight technology integration we were able to achieve with SSL, Clear-Com, and the Axon Cerebrum broadcast control system. In fact, this project has stood out particularly for its very collaborative development: ourselves, ITV, SSL, and the other manufacturers worked together on this, looking at what functionality was required and getting it to work. There was no finger-pointing; we solved issues together in a way that ITV has been delighted with.

“For us, a key feature of the C10 is the ability to present the surface to operators in a relatively simple way so you don’t need an audio specialist to drive it. A competent person can drive a show even though there is some quite complex configuration hidden underneath.

“The other useful aspect was a generous pool of delays that we are able to control remotely, enabling the user to see and hear lip sync at the flick of a button rather than having to do it externally, which makes things much more straight forward.”