Streamline approach to 4K outside broadcasts 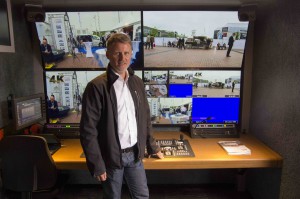 Outside broadcasters wishing to move to Ultra HD are being offered an easier route that should save money. Broadcast Solutions has revamped its Streamline family of five 4- to 16-camera vehicles to make them ready for easy upgrades to UHD (usually via software licenses) and showed its first UHD OB, the eight-camera S8 4K at IBC last week.

It has upgraded all of its Streamline vehicles’ core technology this year, including processing, routing and Stagebox connectivity, and is using the S8 4K “to show potential customers that 4K is not a miracle,” said Rainer Kampe, CTO. “It’s not only for the big sports production. We show we can integrate 4K in our standard series for small productions also.”

He believes that as much as 80% of today’s HD production could easily move to UHD. The only real problem is for live super slomo (which is on its way).

The difference between its new standard configuration and being able to produce UHD is the need for extra I/O for routers and vision mixers (for the quad HD signal) plus licenses for camera upgrades, and 4K down-/up-conversion. The premium for this would be 10-15%, but the nearly off-the-shelf Streamline design allows OBs to be delivered quickly and with significant cost-savings, which should counteract the added costs.

It has now standardised on an Imagine Communications’ router and integrated multiviewer (“on functionality and price”), MADI, Riedel’s AVB-based Tango intercom and MicroN core processing, and L-S-B Broadcast Technologies’ VSM IP-based control system for “its flexibility and scalability.” Customers have a choice of cameras, audio mixers and vision mixer.

There was a lot of interest in the S8 4K at IBC “because they like the concept of having a compact OB van with storage in the rear, so there is no need for an additional truck. It fills the gap between the Sprinter-type vans and large trailer OBs,” said Kampe.