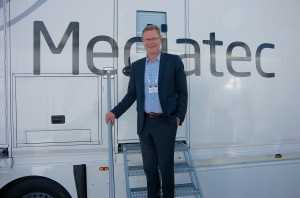 Mediatec Broadcasting has taken delivery of both the tenth of its 10-camera Streamline OB trucks from Broadcast Solutions, and of three new 6-camera Compact Streamline vans, as it seeks to target middle market and lower league sports. The Swedish OB company developed the Streamline concept with Broadcast Solutions three years ago, ordering ten identical trucks, while the German systems integrator has now sold further Streamline OBs, which cost €2-2.5m depending on final specifications, to other broadcasters.

Over three years the trucks “have changed a little bit, due to the fact that some of the equipment we chose at the beginning has changed or been upgraded, but we’ve made a programme to upgrade earlier trucks, so they are still all the same,” said Mediatec CEO Paul Henriksen. The commonality of equipment means that any of its staff in Scandinavia or the German-speaking countries, can easily operate any truck.

“The beauty is you put down the development costs in the first one, so it saves you a lot of money, so long as you stick to the concept.” When Mediatec invested in its first HD 40-camera dual-expandable truck, “we had five people working on it for 18 months, on top of what we paid for the truck. This truck [its latest HD18, which was on show at IBC] had a two day acceptance test,” and delivered a live hockey match from the north of Sweden the weekend after IBC.

“I think about the cost of people. It’s an enormous amount of money,” he added. Also, “when you purchase equipment for ten trucks, you get good deals.”

The OBs carry ten cameras, with ten external inputs, three EVS, and two HDCAM VTRs. “The whole concept is designed to do big volume productions of football and ice hockey, or basketball [as it does in Germany], on contracts of two to five years.”

The three Streamline Compact vans were all delivered in September and started doing German basketball this month. Mediatec hopes to eventually buy ten of these vans, depending on contracts. These are designed for smaller productions, “but with high-quality equipment and fibre, so the rigging time can be as short as possible,” he explained.

“In all the trucks we have Riedel MediorNet, so we can quickly set up all the external communications.”

Both the trucks and vans can carry the cameras on board, so they don’t need a support vehicle, “and all our more than 100 technicians around Europe can easily use all of these trucks, so it saves training and travel,” he added.

“If you don’t have a storage truck, you halve the diesel costs and only need one driver. It’s all about trying to do factory TV.” Mediatec also has ten larger trucks, built between 2006 and 2009 (and since upgraded), catering for 20 to 40 cameras, “but that market is extremely competitive.” 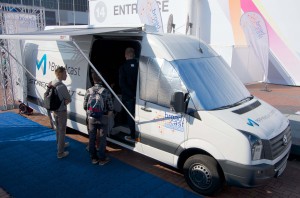 However, “we don’t have any competitors” for the Streamline OBs. “The bigger trucks have a totally different cost structure,” which makes it hard for them to make money on contracts the Streamline is purpose built for. “If you compare a Streamline to a 20-camera truck from one of our competitors, it is about one-third of the price. This is €2-€2.5m to build, compared to about €6m for a big truck,” he said.

It also helped that “we have invested in a time period when few European competitors were doing investment.”

It is focused on the Nordic and German-speaking parts of Europe “and we have a strategy to be among the three best players who enter the market in a country.” It has achieved that in all the countries so far, except Germany, “where we’re close to that.”

Mediatec has one department doing “huge productions”, such as the Olympics or World Championships, another for the medium size league productions (Streamline), and a third using compact vehicles for smaller sports, mainly for IPTV (“streaming a lot of fibre-over-IP connections using Elemental”).

The Compact van includes EVS’ IP Director, “so we can push clips direct to the internet from the vehicle.” Indeed, it built the vans primarily because it believes small leagues and minor sports want to get on IPTV, but this is also becoming an issue for its larger clients. Although Henriksen believes the Streamline trucks are perfect for what they were built for, “we really have to work on how we distribute live clips out of the trucks during production. All our clients would like to have isolated clips for second screen and auto-generated highlights for their sites and posting clips to newspapers.” 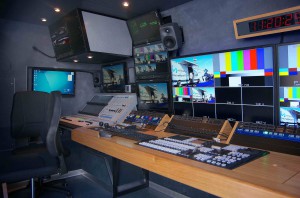 The audio and video areas inside the Compact Streamline van

Indeed, he believes the internet is a big opportunity for sports production, and a major threat to existing broadcasters. “I’m quite sure that, at some stage, some internet operator will purchase some of the main sports rights and distribute that on their exclusive internet platforms, like a Netflix for sports. And we will have to support them with more internet services, like generating more camera angles, clips and metadata,” said Henriksen. “We need to develop services, so we can support clients with clips and metadata, and get them direct to their platforms.”

For example, Mediatec is working with SBS Discovery in Scandinavia to help it with web and IPTV distribution for all of the qualifying games for the European Football Championships. It has set up a downlink of ten simultaneous feeds from UEFA, adding Nordic commentary to all of the feeds (in three languages), ingesting it into its Mediabank (Mediatec’s own archive system), encoding it, and distributing it via Akamai for IPTV and SBS Discovery’s newly-launched website.

The main difficulty with this is the number of feeds, all with attendant metadata, making sure the correct feeds go to each web page, and all the content is searchable. “It’s not tricky to do it with one feed, but it is when you have a lot of live feeds coming in. You can end up with 30 feeds going out.”

It uses Elemental for streaming, and EVS ingest servers, which generate proxies and high-resolution files, so it can edit clips and highlights live. The Mediabank is connected to UEFA’s metadata feed, so it will automatically generate clips and make it searchable.

“Building the OB van is not the difficult thing. It’s how we integrate with all our clients and the extra services [including archive and storage] that makes us unique, I think.”

He sees increasing opportunities for medium and small-scale OBs, particularly as many lower leagues now want to produce live coverage. Mediatec is also starting to do extreme sports, such as mountain biking, where it is doing the World Series for Red Bull’s own channel (Servus TV) in Germany, Switzerland and Austria, and on the internet.

Not all the equipment in the Streamline vehicles is exactly the same. Two thirds of its cameras are Grass Valley LDX and Worldcam, with one third being Sony HDC-2500 (with LDK 8000 or HDC-3000 respectively for slo mo), as that is what clients want. “We run Sony in Switzerland, because TPC in Switzerland runs Sony, if we need to hire something in, and also use Sony on some special projects in Sweden (on ice hockey), where it is mixed with lots of Sony remote cameras.”

It also uses a lot of Bradley NetCam remote cameras, which were developed for Mediatec and designed specially to withstand the impact of an ice hockey puck, as well as the new Marshall miniature cameras.

As to future equipment choices… “I don’t think we will do any 4K production for the next five to eight years. Our clients have hardly been able to invest in HD. If you ask viewers around Europe, the biggest change was going from analogue 4:3 to digital 16:9. I don’t think the market can afford to do a technical change of this size, because most broadcasters have gone to HD in the last two to three years and need to depreciate their investment.”

He also believes “a lot of things need to be changed before we can get 4K distributed.”