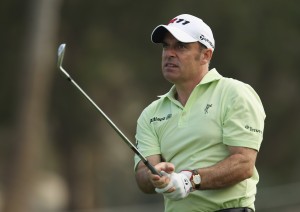 DUBAI, UNITED ARAB EMIRATES – FEBRUARY 10: Paul McGinley of Ireland in action during the first round of the 2011 Omega Dubai Desert Classic held on the Majilis Course at the Emirates Golf Club on February 10, 2011 in Dubai, United Arab Emirates. (Photo by Ian Walton/Getty Images)

Sunset+Vine Oxford, a business unit of Sunset+Vine, has been awarded a multi-programme and VNR Production and Distribution contract for the Abu Dhabi Invitational 2017, taking place between the 28th and 29th January at Yas Links, Abu Dhabi in the United Arab Emirates.

Under the terms of the contract agreement, Sunset+Vine will create and distribute an Official Film of the championship for broadcasters and airlines; produce and distribute international news as well as social media activity for the two-day competition that features an Amateur Championship on Day One and a highly anticipated Abu Dhabi Invitational on Day Two.

A team of Professional Golfers, captained by Ryder Cup legend Paul McGinley, will take on a Celebrity All-Stars from the world of sport and entertainment, led by former Manchester United hero Peter Schmeichel in what will be a world-class line-up for the 2017 edition which this year embraces a new format. The Abu Dhabi Invitational will see 20 professionals and 20 celebrities each paired with a VIP guest as the teams compete against each other in a Ryder Cup Fourball format. All competitors will play from the back tees but the professionals will be playing off a +5 handicap.

McGinley’s team includes Ryder Cup stars Thomas Pieters and Matt Fitzpatrick as well as Ahmed Al Musharrekh, the first Emirati golfer to turn professional, and Ladies European Tour stars Amy Boulden and Kelsey MacDonald. Places will also be allocated by invitations from Abu Dhabi Sports Council and from the European Tour to players missing the cut at the Qatar Masters this weekend.

Sarah Greene, Executive Producer, comments: “We are delighted with this appointment. We welcome to opportunity to manage the production and distribution for this exciting event where our golf team will work with stars of the sport and the VIP competitors to produce a memorable record for all our delivery channels. We are grateful for the opportunity to work with the Abu Dhabi Sports Council and its respected partners, to create a unique record of this championship that has become both a major fixture on the Abu Dhabi and international golfing calendar.”