The London 2017 World Athletics Championships gets underway 4 August at the Queen Elizabeth Olympic Park with a spectacular opening ceremony, watched by a crowd of over 50,000 in attendance at the Stadium. Behind the scenes, host broadcaster Sunset+Vine is getting ready to provide constant coverage of the event that runs to 13 August. 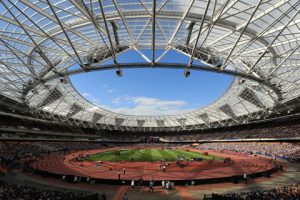 As host broadcaster Sunset+Vine will cover all events live within the Stadium, while its partner in the operation, Film Nova, will provide live coverage of the marathons and all race walks.

Speaking to SVG Europe, Michael Cole, executive producer at Sunset+Vine, commented on the unique challenges this venue poses. “London Stadium is not a permanent athletics venue so the biggest challenge is planning the coverage in a venue where it has not been possible, for almost a year, to get a sight of the track.

And the pressure does not end in the Stadium, said Cole: “On the race walks and marathons, the great opportunity to stage the races in the heart of London does require the infrastructure for the broadcast to come in quite late to avoid excessively long road closures, which means that the host broadcast team need to get everything in place quickly.”

Gary Lovejoy, head of production at Sunset+Vine, commented that the company will be working for the full 10 days of the event providing blanket coverage. “The main integrated coverage of the best of the action will total around 70 hours. In addition, the track and five field event feeds will provide approximately 150 to 200 hours of additional live coverage,” he noted.

On the integrated main feed the vast majority of hours going out each day will be at peak time or at weekends; only the second Friday morning of 3.5 hours is in off-peak UK time, said Lovejoy. In addition, Sunset+Vine will provide daily highlights of one hour every day of the event. 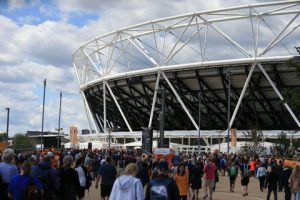 Lovejoy commented on the rights holding broadcasters (RHBs) that Sunset+Vine is working with throughout the World Athletics Championships: “In the International Broadcast Centre (IBC) and Stadium areas we have around sixty RHBs hiring space and facilities from our host broadcast operation. Some of the major visitors, such as TBS of Japan, will have around 300 personnel on site, while ARD of Germany will be in the region of 150. In addition to those channels and stations, we have nearly thirty overseas organisations attending with ENG facilities.”

The grand total of attending broadcast personnel is over 1,600, with Sunset+Vine’s own team around 400 strong. “Our provided facilities range from nearly 100 commentary positions, nearly 40 mixed zone positions, seven studios and 30 other unilateral camera positions,” stated Lovejoy.

Providing in-depth services to so many broadcasters is no mean feat. From the point of view of the cameras Sunset+Vine has set up, the company has 83 host broadcast cameras for stadium coverage, 22 for the marathon, 14 for race walks, two external beauty cameras and over 50 RHB cameras.

Mark Dennis, director of technical operations, commented: “Working with ACS we have for the first time a GVG LDX 86 capable of 6x Speed in a GSS B512 Stabilised Camera Mount fitting. We have 8 SSM Pico Minicameras. Another first is virtual reality (VR) on Robotic Smart Heads with ACS and Deltatre. Our beauty cameras are being provided by ACS working with Broadcast RF.  We have one looking at Tower Bridge and the River Thames, the other overlooking Queen Elizabeth Olympic Park. Both are on pan-tilt heads for fine adjustment and are fully controlled via data over RF.”

All those cameras feed back to the compound via existing stadium cabling, as well as approximately 50,000 metres of cabling that Sunset+Vine has deployed especially for the event.

On workflow, Sunset+Vine as the host broadcaster has installed seven production galleries at the stadium to cover all the athletics taking place. “We also have an OB set up at the marathon and race walks,” said Dennis. “All these feeds along with ISO camera feeds, highlights, graphics and press conference total 77, and are all made available at the IBC for RHBs to book across.”

Dennis said of the trucks needed to work this venue, “the host broadcast operation is all via an NEP UK Flypack Solution based in 17 portacabins, with a further 13 cabins for the host broadcast IBC operation”. He added: “NEP UK won our competitive tender to supply services for this contract. They are one of only a few companies in Europe who can supply this level of kit we required along with the expertise to support it.”

On graphics for the London 2017 World Athletics Championships, Deltatre, long term graphics partner of the IAAF, is the provider. Interestingly, the company has been innovating in the realm of VR, said Cole: “Deltatre’s London office are developing a new system of VR graphics to superimpose distance lines on long jump, triple jump, hammer, javelin and discus. Although the service itself is not new, Deltatre have developed this solution specifically for this event.” Using Vizrt’s Viz Virtual Studio for virtual and augmented reality graphics, Deltatre has developed its solution on top of the Vizrt platform especially for the London 2017 World Athletics Championships. 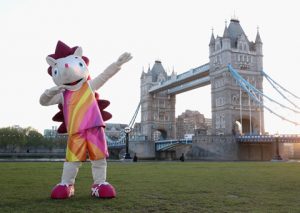 Looking at the most well known broadcaster for the UK working at the event, the BBC kicked off its coverage on Thursday 3 August with a World Athletics Championship special on BBC Two, looking ahead to the world-class athletics to come. Then every day throughout the Championships, BBC One and BBC Two will show all the drama. A half hour highlights programme, presented by Gabby Logan and Ore Oduba from 10pm on BBC Two will wrap up the best of the day’s action and all the major talking points.Steve Cram and Brendan Foster will lead the BBC TV commentary team, which features Steve Backley, Paula Radcliffe, Denise Lewis, Colin Jackson, Phil Jones and Andrew Cotter. For legendary commentator and former European 5,000 metre gold medallist Brendan Foster, the Championships will mark his last before he hangs up his microphone after a 37-year commentating career with the BBC. The BBC will also be providing more coverage through Radio 5 live, the BBC Sport website with an app for a personalised service, and more.

Sunset+Vine is a London-based TV sports production and media company, and is part of the Tinopolis Group. Established in 1983, it is an independent supplier of sports programming to broadcasters in the UK and overseas.

The company specialises in live TV sports production, from host broadcast production of the Glasgow 2014 Commonwealth Games to English Premier League Football and Premiership Rugby output for the BT Sport Channels. From 2016, it became the host broadcaster for all ICC events including the ICC World Twenty20 in India, the ICC Champions Trophy in 2017 and culminating with the ICC Cricket World Cup 2019 in England and Wales.