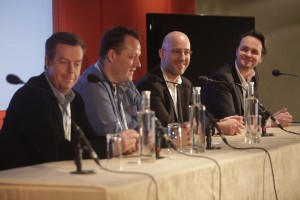 After a hugely successful 2014 edition that took place at Lord’s Cricket Ground, the SVG Europe event designed to examine the key product innovations and major workflow changes shaping the future of sports broadcasting will visit another London location synonymous with the world of cricket on December 2 – The Kia Oval.

Ultra HD trials at the Ryder Cup, the IP revolution, object-based audio and ultra-slow motion replay were among the topics examined during the day-long 2014 programme. Meanwhile, presenters and panellists included some of the industry’s most influential names – among them Sky’s Robin Broomfield, Riedel Communications’ Thomas Riedel and IMG Media’s David Shield.

The 2015 event promises a similarly diverse blend of technology previews and workflow insights. A full programme will be announced next month, but for now please ensure that December 2 is marked on your diary…

“With its forward-looking focus and history of illuminating case studies, FutureSport is an integral part of the SVG Europe technology summit calendar. It’s also one of our most popular formats and we look forward to delivering another first-class event at The Oval,” says SVG Europe general manager Joe Hosken.

More imminently, of course, SVG Europe will host its 2015 Sport Production Summit in Amsterdam on 10 September, just ahead of this year’s IBC. For more information, and to register, please visit https://www.svgeurope.org/sport-production-summit-2015/.