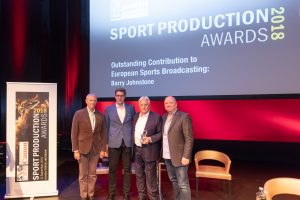 The winners of the 2018 awards were as follows:

In addition, CTV OB chairman Barry Johnstone received this year’s Outstanding Contribution to European Sports Broadcasting Award. A much-admired figure throughout the broadcast industry, Johnstone has been a stalwart of sports and music production since the 1980s.

Regrettably, due to time issues at the venue, it was not possible to run the video that had been specially created to mark Johnstone’s honour. This will be uploaded to the SVG Europe YouTube channel in the coming days, and linked to from the newsletter and website.

“Congratulations to all our speakers, award winners and delegates for making these two events our biggest and best yet. We look forward to sharing our plans for the 2019 Sport Production Summit and Awards in due course,” says SVG Europe general manager Joe Hosken.