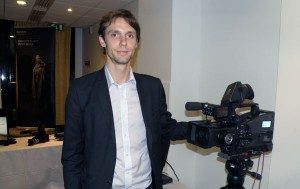 On a crowded Sony booth at NAB2015 Norbert Paquet, Sony Professional Europe, Strategic Marketing Manager, graciously took the time to talk to SVG Europe with great depth and candour about the company’s journey towards live production over IP. The discussion ranged across Sony’s Network Media Interface; its collaboration with Evertz and other partners; contribution to the EBU-SMPTE Joint Task Force on Networked Media including the recent Minimum Viable System report; and the plan of work ahead for the remainder of 2015 and beyond.

Can you first give us a snapshot on where you are in the development of new IP interoperabililty (IP Live Production) technologies?

The industry thinks that IP is mature enough to move live production signals over networks. Networks are everywhere, and bandwidth is more and more available. But fundamentally there are constraints for live production, for instance that you cannot wait for load or for transfer. It’s live. Networks are fundamentally not realtime, not deterministic.

There has been a lot of study around how we can achieve live prodution over IP, and there’s a group called the Joint Task Force for Networked Media that was formed two and a half years ago. Sony has been participating in that group, together with other manufacturers such as Grass Valley, Snell, Evertz, Cisco and other IT manufacturers – and you also have networks and American standardisation institutions involved.

The goal of the Task Force is to discuss how we can achieve it, by defining the methods – not to make standards, but to define the methods. And in March the Joint Taskforce published on its web site a document called MVS: this is the Minimal Viable System architecture. This defines the overall architecture of a live production system to work over IP, defining some of the key layers and methodologies that will be put in place.

One of the key outcomes of the MVS is that current standards such as the SMPTE 2022, as it is, are not sufficient to match these requirements. For example if you speak about synchronisation of the network, relating to SMPTE 2059, this was a a draft but has been finalised last week [the week before NAB] by SMPTE and was written by Cisco and Sony.

So it’s the combination of different techniques put together to achieve this architecture that the Joint Taskforce has defined — and it is now in the hands of SMPTE to write down that standard.

In parallel, being very active in this Task Force Sony has found out that we could develop these methods as a technology, and this is what we call the Network Media Interface. Note the Network Media Interface on its own is not a standard, it is a set of techniques — including SMPTE 2059 for synchronisation, and 2022-7 for network protection – and some other techniques that SMPTE will write down as a standard, all going together to achieve live production over IP. (SMPTE 2022-6, which relates to the transport of video and audio metadata over a network has to be amended; 2022-5, which is forward error correction, also has to be amended).

The Network Media Interface on its own is something we have shown several times in prototype. But now at this NAB we are arriving at a time where Sony will embed that technology into a chipset. Because now we have this document from SMPTE we are quite confident that it will become a standard and we’re going to be able to put it into a chipset. This chipset will of course go into Sony products, and you can see here on the booth a switcher with IP inputs – this is a working sample. This is the first-ever switcher having IP interfaces.

EVS would say that its DYVI live IP switcher is first in this regard?

But Sony alone is not capable of building a full truck, a full studio system. And our customers want to have choice; this is very important for a competitive market. So we’re going to open this iniative to partners – and we already have 30 partners that we announced at this NAB supporting the initiative. Adding to the initial list announced at IBC you’ll find big names like EVS, Quantel Snell, Imagine Communications, Harmonic, and Evertz of course. We need these partners.

One of the demonstrations we have here on the NAB booth is a graphics station using a Matrox board, with our chipset and PCI Express, to make a graphic station over IP. So the goal is to propose to the industry this layer of technologies called the Network Media Interface, to enable people to embed them in their products – and there is a lot of engineering resource of course that we dedicate to this from our side of the alliance.

The partner development will start probably in the next few months, by the time we finish the chipset and all the descriptions of that chipset (because the MVS architecture has only been defined last month). This is on the right track.

So you accept that your partners in the alliance will be looking to develop competitive products?

That’s life. Sony did that with SDI back in the 1980s. They delivered a chip and everyone bought SDI products. This is the way to move forward. Sony has been very active in the Joint Task Force – an investment of two full-time engineering people. A very serious commitment, because we strongly believe in the move to IP.

But there is one [other] very important point. OK, everybody is now going to throw data over networks. But you need to manage the network: the devices and the authorisation. It is not only about developing a chipset; it is also about a system manager. And the system manager will have different components.

But that’s not all. As soon as you’ve created the network you start to throw data — but you need to authorise that data. So it’s also about device recognition, device authorisation, access to the network resource, and ensuring that your network is properly dimensioned, monitoring the network, monitoring the device, configuring the device – an overall set of functionalities that you need when you start to move to IP, that we are going to provide through the system manager.

The engine itself is going to be provided to the market, and then there a lot of software development kits and APIs around that. One example; it’s not on demonstration here but on the L-S-B booth. L-S-B produces Virtual Studio Manager, which is used in many trucks and studios around Europe. We directly interface the Virtual Studio Manager to our system manager. So for the operators, whether they have SDI routing or IP routing or hybrid routing, it’s exactly the same interface for them and they can keep it at the same level of operations. So we build the engine and we keep open all the different interfaces that can be put across and along.

This wasn’t always the case with Sony, which has often taken a rather closed and proprietary approach itself. Times have changed…

It’s time to open up. When you go to the IT industry, there is a lot of openness required. We have shown already the first integration with Evertz (we announced that partnership back at IBC). So the first step here is a gateway, because Evertz already has its own proprietary system in the SDVN architecture, which is IP-based on the core of their system.

Two things we are showing: we send network media interface data up to their system and there is a gateway embedding that data and treating it – so for customers who have already invested in existing systems SDVN can interroperate. And the second thing is that they have their management system as well, the Magnum system (like the VSM).

Magnum can control their system as well as our system. So it’s a full integration with partners to provide a top layer for operators, with different products that will feature IP interfaces on the back. But we’ll keep some BNCs because there will be a transition phase from SDI to IP. This is why we keep developing SDI to IP converters, as we announced at IBC.

There will be a mix of native; SDI to IP converters; and third party gateway systems that we will need until we totally embed everything. That’s the transition towards 2016, and we have a strong commitment to our roadmap.