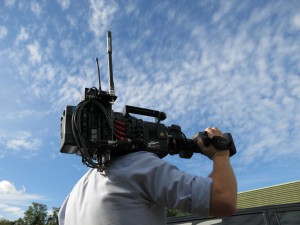 The mission statement on the Broadcast RF website is refreshingly direct: namely, to provide high quality, state of the art RF technology to be used in the making of television programmes covering news, sports and entertainment. In the case of sports, as with the other sectors, this focus has paid off handsomely – Broadcast RF having been enlisted to work on coverage of events including the London Marathon, The Open and the Wimbledon Championships.

How would you describe 2015 in terms of overall activity levels for Broadcast RF?

Considering this is an “odd” year and generally odd years do not have the major sporting events, it’s been an extremely busy year for Broadcast RF and our engineering team.  We have had our usual contracted UK work, as well as the Women’s World Cup in Canada, and of course the Rugby World Cup on home soil.

We have used this year to further develop all of our RF systems in preparation for the busy 2016 we have ahead.  We are working on our VeloVue mark 2 and all its derivatives for different sporting disciplines, as well as looking at camera control for our minicam RF systems.  We have also been constantly making improvements to our long distance RF facilities, which include our in-house developed GPS/mapping systems and improvements to our bike pannier systems as well as our RF router and monitoring systems.

This year has seen the development our of 4K wireless camera system, which caused quite a stir at IBC. We have also been looking at the switch over to IP links and control systems for some of our unique groundbased long distance RF events.

Some of our RF transmitters have no front panel control due to their size, so we have been developing handheld controllers for these which reduces the need for laptop programming when on site. Anything that makes the hire of our equipment easy and effective.

All of the developments noted above have the need for many prototypes to be built before the final product is developed, so our 3D printer has been running constantly creating housings and control panels for our prototype builds.

What kind of response did the 4KRF receive at IBC? And what were your overall feelings about this year’s show?

The 4K RF systems caused quite a stir at IBC.  We have had lots of interest in the aerial camera downlink, although not so much for the touchline RF camera solution as the latency needs to reduce a little before that arouses more interest. Watch this space.

In what ways does 4KRF progress the overall possibilities for wireless camera technology at sports events?

It shows the world that 4K wireless cameras are now a possibility now and not something for the distant future. Latency is currently a problem for stadium RF cameras, but we are sure this will reduce soon as the encoding technology improves.

To what extent do you think that awareness of RF issues – e.g. spectrum efficiency and the changing spectrum landscape – has improved in broadcast circles over the last few years? 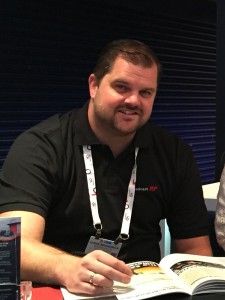 The problems with spectrum efficiency are understood in most RF engineering circles; however, I do not think [they are] widely understood out of these circles.  Work must continue to impress upon everyone in the industry that pressure needs to be continually put on governments to secure spectrum for programme making and special events, to ensure that the current high standards of production are allowed to flourish.

We need to stop selling spectrum to the highest bidder and to think about the impact it will have on our major sporting events.

In what ways do you think sports broadcast professionals’ use of wireless systems will (have to?) change in the short to mid-term future?

As RF technology improves so will spectrum efficiency, but demand will also increase. One of the biggest growing areas in RF is in bespoke POV cameras. Production ideas are going wild as the size of HD transmitters and mini cameras are reducing.  These additional live POV ideas require more spectrum and Broadcast professionals will have to understand that the amount of usable spectrum available is not endless and that until technology to improve efficiency is widespread, some events will have limitations as to the number of cameras that can be deployed.

Sharing spectrum, either with other broadcasters on-site or with non-broadcast activities, is often suggested, but this is virtually impossible to implement in practice. Alternative technologies, e.g.Wi-Fi based cameras or 4G bonding, have a place but are not going to replace the reliability and repeatability of the conventional wireless camera in the foreseeable future. Securing spectrum for programme making is vital to the future of RF cameras.

If you had to pick three landmark sports-related projects for Broadcast RF, what would they be – and why?

VeloVue – a world first: An exciting on-board RF POV camera which debuted at the World Track Cycling Championships in Paris this year. Similar systems are currently under development for other sports disciplines using the same mini camera and RF technology, housed slightly differently to suit the application.

Women’s World Cup in Canada & the Rugby World Cup in the UK: Broadcast RF supplying host broadcast RF cameras literally on the touchline of these major sporting events on the world stage.

Finally, please give a few hints of upcoming projects for Broadcast RF.

It’s business as normal with events such as the London Marathon, The Open Golf Championships, Wimbledon Tennis and the Ryder Cup in the US.

We will have a large presence at the two major sporting events in 2016, but if I told you what they were and who they were for, I would have to kill you!

We will also be further developing our unique 4K RF systems and our onboard/athlete-mounted RF minicam systems for lots of different sporting applications.