Broadcast RF was set up by Arthur Dyson in 1998 with one aim in mind: to provide the broadcast and related industries the opportunity to hire specialist microwave and wireless camera equipment.

Reinvestment has been key to the company’s growth, leading to the ability to bolster its arsenal of RF equipment. As a result, it has progressed from owning a small stock of RF transmitters, receivers and peripherals to owning one of the largest stocks of state of the art RF equipment in the world. Our discussion with Commercial Director, Chris Brandrick, was far-reaching.

During last year’s Sit Down you spoke about how remote production was impacting your business. How are things developing with this technology as far as your operation is concerned? 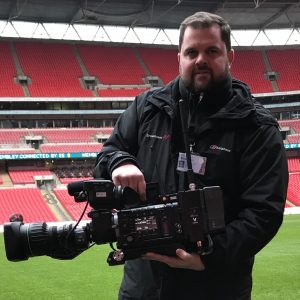 Our version of RF remote production was launched mid 2017 as a simple extension of an OB truck or flypack system which uses a bidirectional point to point link to carry multiple cameras feeds from a remote site. In the other direction can be all the feeds from the main OB that cameramen are used to so effectively, you can have a full remote OB camera operation, which feels like its cabled into the main truck.

We have recently used this system, branded as ‘InterconnectRF’ on a high-profile OB where there was a remote venue a few miles away from the main OB in the city centre. The specification for this venue was one cabled camera and four wireless cameras, the solution was the bidirectional InterconnectRF system which meant no second OB submix was required.

As far as production were concerned, the remote venue integrated seamlessly into the main OB with the director having full control of the cameras which included talkback, data control and return video in the city centre.

The point of this technology is to be cost efficient and reduce the complexity of using a separate OB for a remote site, without any downsides.

On more complex projects we increasingly supply systems with components distributed over multiple sites. As an example, you might have multiple helicopter receive locations connecting back to a main decoding site. The feed from one of the sites might get back to the main hub as ASI on fibre, while another goes first via a point-to-point link to a mid-point, from where it’s brought back to the main hub via a private IP network.

The remote paint control of the helicopter camera might be in an altogether different location, connected to the main hub via an encrypted VPN tunnel over the internet. All sites can be configured and monitored from the main hub or from around the world via VPN.

For this year’s FA Cup Final Broadcast RF provided a UHD helicopter downlink for Arena Aviation, the first of its kind to be deployed on the oldest national football competition in the world – plus camera radio systems. Tell us more about this project.

This was the first UHD helicopter downlink for BT Sport on the FA Cup Final, but not our first as Broadcast RF. We started our UHD journey back in 2016 for the Euro 2016 Football Championships. Latency of these links was always an issue and has been since — to be honest. The new Vislink ultra-low delay HCAM units are now available from us, so the UHD downlink used at Wembley for the FA Cup Final incorporated this new HEVC technology.

Arena Aviation used their AS355 twin engine helicopter with a Shotover F1 platform, Sony F55 camera and their Angenieux Optimo 25-250mm lens. We took the UHD feed from this camera and downlinked the aerial pictures to the BT Sport OB in the stadium.

In addition to the downlink, we provided three wireless camera systems for Telegenic/BT Sport which were used pitch side, in the tunnel and on the balcony for the trophy ceremony, and a couple of RF monitors for pre-match and post-match analysis.

The FA Cup Final is a regular fixture in our annual calendar, and not only did we make history by supplying the first ever low latency UHD downlink from this historic venue, we managed to pull it off on the same day that we supplied 17 wireless radio cameras including seven UHD RF systems for the Royal Wedding, too.

The Commonwealth Games Handover video was amazing. Tell us about your part in this innovative programme.

To be honest, we knew this shoot required a small and lightweight transmitter for a Movi rig and needed to cover a large area around Birmingham’s Victoria Square, but never imagined it would be such a unique production.

The RF system was fitted to the Motion 24 supplied Movi rig, with CTV providing the facilities and executed in remarkable fashion by a six-man camera crew. The shot involved two technocrane handoffs with two vehicle transitions and had 11 distinct locations, including inside the Council offices and the Town Hall.

Our antennas positions were key to ensure the robust picture for the shoot. We had antennas in the Council office, on the outside balcony of the town hall, on an office building opposite the town hall and at the lower level of the square.

Is latency still an issue with RF technology?

Latency will never go away, it’s a function of the encoding and decoding process as the video signal passes through the RF link. In most circumstances it’s virtually un-noticeable and is only a minor issue when a radio camera is used in conjunction with say a presenter mic that’s using a different return path with no delay. There are tricks that an OB will employ to negate that time difference though.

In certain applications, such as marathons and other road races, we deliberately increase the overall latency. This brings two advantages:

Increasing latency for RF processing allows the use of more complex error correction which means that short signal drops, for example when passing underneath bridges or going through tree lined roads, can be compensated.

4G cellular bonded technology has been reviewed this year and has a much longer delay than we are used to seeing than conventional COFDM links, but there are uses for this and it works very well. The challenge is always delivering the pictures back to an OB location, where you need high quality, uncontested internet provision. Watch this space for some cool developments in our onboard long-range camera solutions.

We are also closely watching developments in the area of 5G technology and believe it will play a large role in the world of broadcast in the future. The question is how and where?

What do you see as your main challenges for the next twelve months?

HEVC wireless cameras are in their infancy, so we will be challenged by incorporating this into more of our projects and trying new ideas with the technology.

Another challenge will see the rise of cellular bonded technology into the market. This is out there and working for news crews and events that can handle the video latency.

We have been testing a 4G onboard solution which goes hand in hand with our VeloVue onboard camera technology. We are obviously reliant on the telecom companies to deliver our pictures, but it’s great, it just works! We are confident this will change the landscape for long distance and delay non-critical events and really is a game changer.

With the BBC having streamed the World Cup in HDR, do you see this as being a major development in this technology? And how does that affect your operation?

Is the future UHD HDR, UHD SDR or even HD HDR?  What version of HDR?  While broadcasters are working this out, we are ready with our new HEVC wireless technology. We are doing UHD now and the equipment is capable of HDR.

Finally, what can visitors to your stand at IBC expect to see?

IBC, for us, is a good opportunity to catch up with new and existing clients and discussing their requirements for the next year of events. Our stand is small, so we cannot display our full quota of new technology, however we expect to be showing our 4G onboard camera along with something we have developed with Aerial Camera Systems with whom we are co-exhibiting.