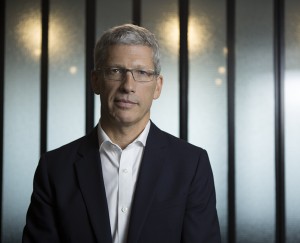 “Choice of connectivity for contribution and distribution (increasingly over CDNs) is absolutely key” in sports, says Interxion’s Richard Craig-McFeely

In two years’ time, Interxion – a leading provider of network-neutral colocation data services across Europe – will celebrate its 20th anniversary. Over that time the company has evolved to the extent that it now supports more than 1,500 customers through 42 data centres across 11 countries, and business is booming. It is focused on six different sectors, namely: Cloud, Connectivity, Digital Media, Enterprise, Financial Services and System Integrators.

Overseeing the Digital Media segment in the role of Strategy & Marketing Director is Richard Craig-McFeely. A regular attendee and speaker at SVG Europe events since the organisation’s earliest days, Richard has held senior sales and marketing roles with Softimage (as part of Microsoft), Avid, NaturalMotion, Quantel, KIT digital and Tata Communications, prior to joining Interxion in 2016.

To what extent would you say Interxion’s core objectives have changed over the last two decades? And what is unique about the Interxion offer?

Twenty years ago Interxion was one of the first companies to offer network-neutral co-location services, and that started with facilities in the Netherlands. Today we have facilities in 13 cities in 11 countries and we continue to focus on network-neutral colocation services. This is important for the sports space as choice of connectivity for contribution and distribution (increasingly over CDNs) is absolutely key. As the demand for cloud-based services has increased, we have added secure and deterministic access to the major Cloud Service Providers. So we are cloud-neutral as well as network-neutral. So I would say that [our aims] have remained the same, but we have adapted to the world around us.

In terms of the uniqueness of our offering our data centres are in urban locations as near to our customers’ customers as we can get. We specialise in low latency, highly transactional applications across Digital Media, Financial Services, Connectivity, Cloud, Systems Integrators and Enterprises.

Our Digital Media segment includes Broadcasting, Games, Gambling, Ad Tech and Social Media. We host one of the most successful programmatic advertising matching engines, which is highly transactional and where minimal latency is absolutely vital. These characteristics make our facilities ideal for sports broadcasting applications.

In terms of your six sectors, one might assume that financial services would represent the most significant contributor to the business…

Not necessarily. I can’t divulge the actual split, but it is certainly fair to say that we have lately seen a huge growth in Cloud and Connectivity. My sector, Digital Media, is matching this performance as the media sector embraces co-located architectures. For us this sector covers a fairly diverse group of customers in what might be called traditional broadcasting – content owners and service providers – as well as developers of programmatic ad technology, social media platforms and so on.

It is always worth pointing out that while we all have these interesting and exciting devices and applications, they are all underpinned by well-placed and secure buildings filled with computers, and that is the service we offer. In broadcasting there is a trend [away from the traditional machine room] infrastructure towards the use of data centres so you don’t have the cost of running it yourself. So obviously that has been positive for Interxion.

How do you guide broadcasters to help them deal with their data needs now – and in the future?

Transitioning to the cloud is not necessarily straightforward when you have got a lot of legacy equipment, people and infrastructure. In the case of [more contemporary businesses like] Netflix and Amazon Prime, they will have a very modern sort of infrastructure and an architecture that is very data-centric in place anyway, but what we have increasingly been finding with [traditional] broadcasters is that they are describing an architectural set-up which matches changes taking place in the IT space. And that’s where we can start to tell them about the option of colocated hybrid cloud services.

In a nutshell, our services in this area allow customers to move their existing equipment into a secure and resilient data centre surrounded by a wide choice of connectivity options. This in itself is a step up from running a dedicated machine room. Your operational staff will retain the same user experience independent of the location of the equipment.

Within our data centres customers can connect to the major cloud service providers. This allows broadcasters to combine the best of both worlds; their existing dedicated equipment with the capability to scale and test in the clouds. There is a lot of talk about transitioning to the cloud. This is it, right here and right now.

Another important aspect is that you are connecting to the cloud within the data centre through a secure and deterministic connection – you are not doing it over the open internet with its security, reliability and performance issues. For example you are connecting through ExpressRoute [cloud integration solution] for Microsoft Azure, which means you get dedicated deterministic bandwidth, which in broadcast services is very important.

Can you give a recent example of a project where your services have assisted a sports broadcaster?

Yes, a project involving NFL coverage being relayed to European audiences immediately springs to mind. The rights holder, MP & Silva, contracted Deluxe Entertainment Services with regard to picking up the US feeds via the MX1 facility in Pennsylvania. They are then carried over the Atlantic and brought into our Brick Lane [East London] data centre via diverse IP streams, where Deluxe processes the content and produced different versions ready for delivery to the broadcasters All of this is overseen by Deluxe’s operations centre, which is situated in the centre of London.

Finally, it’s a tough ask after a phenomenal summer of events, but what would be your own sporting highlight from the last few months?

That is tricky! On my cycling side I would say Chris Froome with another Tour de France victory, but on balance I think the person I found most impressive as a distance runner myself is Mo Farah. His performances have been really amazing. In London four years ago he did incredibly well and won the distance double, but this time he had to really work for it! To do the double-double is a huge achievement in athletics, so I am very impressed with him. He also has twins, and so do I… I only wish I could run as fast as him!