SVG Europe’s annual Sport Production Awards took a big step forward this year at IBC by transitioning from the RAI to a formal theatre that gave this year’s honorees, BBC Sport, BT Sport, UEFA, and retired OBS Managing Director Manolo Romero the chance to take to the stage and celebrate their achievements.

Part of SVG Europe’s Sport Production Summit, which was held at the DeLaMar Theatre in Amsterdam on 14 September, the Awards were hosted by former SVG Europe Chairman and SVP, Media Production at Lagardére Sports, Peter Angell and sponsored by Canon Europe. Kieran Magee, Marketing Director Professional Imaging at Canon Europe, co-presented the Awards on behalf of Canon. 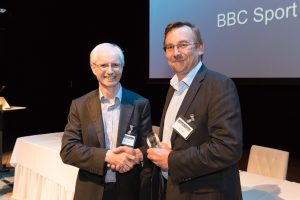 The first award was for Outstanding Digital Achievement and BBC Sport won the evening while ATP Media for Tennis TV and BT Sport for UEFA Champions League Final in VR 360 were finalists. BBC Chief Engineer Richard Morgan was on hand to accept the award and he thanked all those involved in the digital production as well as the overall production team for their efforts.

The second award was for Technical Achievement and UEFA’s Remote Uncompressed 4K Production whereby a team based at BT Sport in Stratford, UK could produce an event that was taking place in Krakow. The other two finalists were Formula One Management for F1 Conversion to UHD and Sky Deutschland for new Sky Sports HQ Production Centre. Philip Williams, UEFA Senior Additional Programming Manager, came forward to accept the award on behalf of the UEFA team and its project partners. 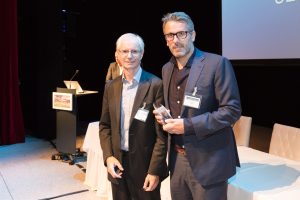 “UEFA has embarked on a sizeable challenge for the delivery of Euro for Europe in 2020,” said Williams. “This successful remote production project really represented another milestone on that journey towards that tournament. I would like to thank everyone who worked on this project, providing connectivity, redundancy, and virtually zero latency over such a vast distance. And a special thanks to Gearhouse Broadcast, Telegenic, SAM, and BT Sport for their support and use of a fantastic facility at their Olympic Park in London. And it would also be remiss of me to not mention the two people from UEFA who did the lion’s share of the work on this project: senior broadcast engineering manager André Nel and broadcast engineer Sarah Connell.” 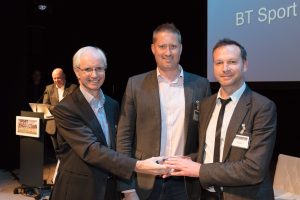 The big award of the night, Outstanding Live Event Achievement, went to BT Sport for the 2017 UEFA Champions League Final which was held in Cardiff at the Millennium Stadium. BT Sport’s efforts included creating a host feed that was available in HD, UHD-HDR, and VR 360. Other finalists included BBC Sport for Olympics Rio 2016 and ITV Racing for Royal Ascot 2017. The unprecedented breadth of production coverage across several formats saw BT Sport take the coveted prize; on hand to accept the Award were Chief Operating Officer Jamie Hindhaugh and Chief Engineer Andy Beale.

“To be frank, it was a great event in a great city and the responsibility of being the host broadcaster was a great privilege for a broadcaster that is only four years old,” said Hindhaugh. “But more importantly, it was the support from UEFA and the trust they showed to allow us to do some of the things we did. I am very proud of the BT Sport team that produced this, from the editorial content through to all the innovation. But the important thing to recognise, and the strength of BT Sport, is the strength of our partnerships and the way we engage with the industry and the way it supports us.” 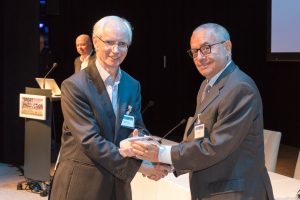 The emotional highlight was Manolo Romero’s acceptance of the award for Outstanding Contribution to the European Sports Production Community. Romero, former OBS managing director and current managing director for International Sports Broadcasting (ISB) transformed the nature of host broadcast operations and helped change the production process for major global sports events which previously relied heavily on national broadcasters from within the country hosting the event.

“Thank you for thinking of me for this first-ever European prize,” said Romero. “I am very humbled and honoured as I started my career in Europe working for the European Broadcasting Union in sports coverage. At the time, most of the sports coverage had to be invented, almost from scratch. And I was here in Amsterdam six years ago when we introduced what advances we would be using during the London games in 2020. There was 3D, VR, super hi-vision, high-speed cameras, and many other technological advances. And many of those advances are here today and confirms the speed with which we adapt to new technologies.

“Our operational philosophy was always simple: bring the viewers closer to the athletes and show the emotions. This continues to be the case today and we have many different media possibilities. I am no longer involved with the greatest show on earth which is the Olympics but I am enjoying working with other events like the European Games. And while they don’t benefit from Olympic budgets we are having fun and success creating similar emotional pictures by using the technology available to us now. I would like to thank and recognise all those creators that work and create those technologies and the many friends and colleagues who put our vision onto screens. And last, but not least, I want to thank my wife for her undying support and patience and my daughter Ursula.”

Fergal Ringrose, SVG Europe, Executive Editor, said that SVG was delighted with the quality of the entries this year as a total of 24 entries were received across the three categories.

“We would sincerely like to thank every broadcaster, production company, sports federation and vendor that took the time to submit an entry to our 2017 Awards,” he said. “We would also like to thank those many members of our European Advisory Board who took the time to cast their votes. Our new presentation format was very successful, giving a new impetus to the Awards in Europe. We look forward to staging a bigger and better Sport Production Awards ceremony in 2018!”