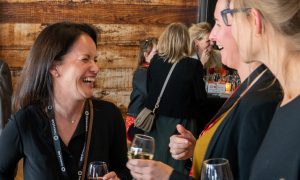 SVG Europe Women held a networking drinks reception at IBC this year while also celebrating the rapid growth of the initiative that is now a significant association for women in sports broadcasting.

The event, held in the First Floor Restaurant within the Rai on Saturday 14 September, was sponsored by CenturyLink. With over 250 people in attendance the conversation was focused on how to promote women within the industry, with business cards being exchanged and contacts being made.

CenturyLink’s Laurinda Pang, president for international and global account management, gave a welcoming speech at the event during which she encouraged people on the evening to talk to five people they have never spoken to before, a challenge that was eagerly taken up by the crowd. 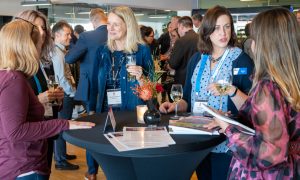 Pang commented: “It was a pleasure to speak at the SVG Europe Women networking drinks at this year’s IBC. It was encouraging to see so many women and men joining together to promote diversity within the media and broadcasting industry. And, it was great watching so many people take up the challenge to speak to five new people during the event!”

Heather McLean, SVG Europe Editor and internal head of SVG Europe Women, said to attendees: “This initiative is all about bringing more diversity into this industry to power the momentum that is needed to maintain progress in sports broadcast, and give it the fresh, broad insight and perspective that is needed. 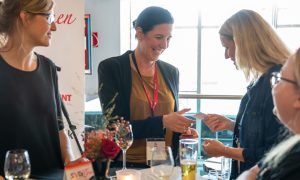 “At each event of our events we are getting more and more people registering, and they are a fantastic mix of women from the sports broadcasting industry, from successful, experienced women who have achieved great success in their careers, to women breaking into and up through this industry who are looking to network, seek inspiration, and gain support. Keep coming to our events, keep sponsoring them, keep supporting them, and let’s make it happen.”

McLean then gave a progress update to all on how the initiative has grown since IBC September 2017, when she was asked to take responsibility for it. She explained that growth has been rapid; while the initiative’s first event in December 2017 at the DTG in London had around 30 people sign up, with about half of those attending, the second event in July 2018, which was supported by Sky Sports and Sky Production Service and sponsored by CTV Outside Broadcast, marked the start of the growth. 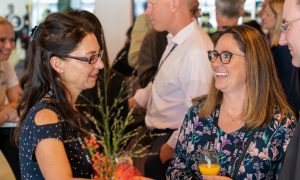 She said: “I thought it would be a small sign up of about 30, like the December event, but just a couple of days after registration opened we had 90 people register so had to find a new venue, which was amazing, and the registration went up to around 130. It was a brilliant evening.

“Our Winter networking event last year was with BT Sport and Timeline TV at BT Sport’s studios in Stratford, East London. It was a spectacular venue, with over 200 people in attendance,” continued McLean. “This year we have held three events; at Lord’s sponsored by Imagen following SVG Europe’s SportTech event, at Sky Studios in summer supported by Sky Sports and Sky Production Services in a gorgeous venue which we filled to the roof, and here at IBC. Next year I have plans to grow what we are doing even further, with events throughout Europe. It’s really exciting. Keep coming along, and keep sharing your ideas!”

2020 will be a great year for SVG Europe Women with multiple events coming. SVG Europe Women is now looking forward to its Winter networking event with BT Sport and Timeline TV on 30 January 2020, at BT Studios, Stratford, London, with another evening of networking and insightful sessions under the glowing screens of Studio 1. Save the date, and more details soon!