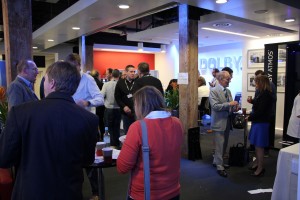 Next Generation Audio Summit at Dolby, Soho Square, on 10 November.

A capacity crowd filled the Ray Dolby Theatre at Dolby’s premises in Soho Square, London, on 10 November to find out more about Next Generation Audio (NGA) technologies. The event was the first-ever audio-centric summit from SVG Europe.

Object Based Audio, Immersive Audio, Virtual Reality, Mixed Reality Audio and more were analysed and debated during the busy day-long programme of presentations and panel sessions. There was particular emphasis on the implications these new technologies have for broadcast audio workflows, while the event concluded with a special Dolby Atmos/Dolby Vision presentation of Jack Reacher: Never Go Back.

The event was made possible by a collaboration between SVG Europe and Dolby. Reflecting on the summit, Dolby senior product marketing manager Rob France comments: “With all the activity around next-generation video, audio really needed its own platform in which to discuss the progress being made in delivering great new audio experiences. The high level of engagement from all the attendees and the wide range of topics covered demonstrated that there are some exciting opportunities ahead to substantially enhance experiences for sports viewers.”

SVG Europe Managing Editor David Davies adds that “the summit underlined the remarkable level of activity currently taking place around NGA, and indicated that profound change to broadcast audio per se is now just around the corner. It was fantastic to have the chance to work so closely with Dolby on the event, and the feedback from attendees has been very positive. We expect that a second SVG Europe audio summit will take place next autumn – more details to be released soon.”

Individual session reports from the Next Generation Audio Summit will appear on SVG Europe over the next 7 days, with an overview of ORF and EBU-PLOUD Group’s Florian Camerer already online (https://www.svgeurope.org/blog/headlines/next-generation-audio-summit-2016-florian-camerer-discusses-oba-and-immersive-audio-opportunities-in-scene-setting-keynote/).