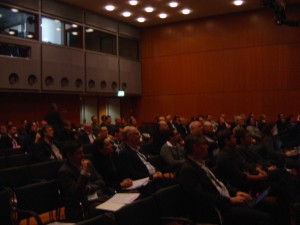 More than 130 ISE visitors attended the inaugural Sport Facility Integration Summit (SFIS) on 5 February to find out more about the emerging technologies shaping the next generation of sports venues worldwide.

The event – which took place on-site at the RAI in Room E102 – was produced by Sports Video Group Europe. Previous SVGE events have focused primarily on the broadcast capture and coverage of sports events, but this new summit was devised to reflect the seismic changes affecting the design and implementation of AV in stadiums and arenas worldwide.

A blend of authored sessions and panel discussions, SFIS kicked off with a presentation by Cisco Systems’ Bryan Bedford on the impact of IPTV, Wi-Fi and mobile video on the fan experience both inside and beyond the stadium. With Cisco solutions in nearly 200 venues around the world, Bedford is well-placed to pinpoint “the tidal wave that we can go all surfing on” represented by increased connectivity, but emphasised that we are only in the early stages of “a fundamental shift in the industry regarding the sports stadium business”.

With the global sports events taking place in Brazil and Russia over the next few years, it stands to reason that these are boom times for venue integrators. No wonder, then, that this is “an increasingly competitive sector with exciting opportunities” for installers and consultants, as moderator Bob Snyder (rAVe Europe) observed during a panel session that featured input from Blackmagic Design’s Craig Heffernan, Fulfil Engineering’s Norbert Labudda and Broadcast Networks’ Malcolm Robinson.

Elsewhere in a busy half-day programme, two sessions focused on the latest developments in audio networking, with Mark Yonge (AES) tracking the rapid progress of the AES67 standard since its introduction last September and Rick Kreifeldt (AVnu Alliance, Harman) heralding the first product – namely a switching solution developed by Extreme Networks – to pass through the rigorous certification scheme guaranteeing the interoperability of AVB-based networks.

NewTek’s Carter Holland, Clear-Com’s Bob Boster and LiveU’s Paul Shepherd were among the other contributors to a programme that also addressed venue audio clarity, IP transport and second screen.

“We are delighted by the enthusiastic reaction to the first Sport Facility Integration Summit,” says SVG Europe general manager Joe Hosken. “It’s really a venture into a new area for SVGE, and the strong attendance level confirms our belief that sports venues is a sector that demands analysis in its own right. Alongside our continuing programme of broadcast technology-oriented summits, we look forward to developing our representation of the fast-moving arena and stadium business at future events.”