SVGE SportTech: inside the broadcast phenomenon of BT Sport 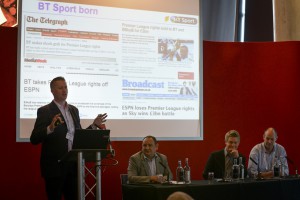 The massive technical challenges and against-the-clock timescale involved in the development of the new BT Sport channels and production complex were examined in detail by BT Sport chief engineer Andy Beale during the keynote presentation at SVG Europe’s SportTech summit last week.

From the announcement on 13 June 2012 that BT had secured rights to show some Premier League rights to launch of the three new channels, the BT Sport technical team had “just over a year to deliver some sort of service to our customers. From the beginning it was clear that [BT Sport would be all] about delivering a multi-channel, multi-platform sports entertainment network, encompassing not just high quality sports content but also quality programming around those rights – magazine shows for example.”

Basing itself out of the Olympic Park facility that served as the IBC during the Games but which had subsequently been completely stripped out, the nascent broadcaster had a mere 26 weeks to fit out the studios before handover to production on 4 July 2013. A mere three weeks later, the channels went on air.

The scale of their achievement becomes clear when you consider the sheer size of the complex: three studios, 16 design rooms, green rooms, production offices, makeup rooms, galleries and sound control rooms, 20 edit suites, and much more.

Of the workflow, Beale says that it was “decided early on to join the DPP and make that our format. This prompted an examination of codecs, and it was clear that most vendors are mature in ABC workflows.” Incorporation of sufficient redundancy was “essential”, while in general terms “virtual production workflows were wanted, and where possible we specified that. We also needed to ensure accelerated file delivery as we often exchange file formats with other media outlets.”

At the core of the facility is a “really efficient media network – well-built and dependable. We also wanted to provide production tools so that producers are able to work at their desks.”

Of course, in satisfying these numerous challenges BT Sport was assisted by some crucial partners, namely Timeline Television (design/build and technical services) Sunset+Vine (primary production partner) and Megahertz (systems integration). Recalling the “whirlwind” preparatory period, Timeline Television managing director Dan McDonnell related his memories of “some very hard work, drawing on a team of about 500 people, including freelancers, to help us deliver. From our point of view, the primary elements were huge MCR functionality and huge BT connectivity, with over 150 HD lines ingoing and outgoing. The MCR was a very big piece of work, with the Snell matrix deployed as backbone.”

Identifying some of the crucial system components, McDonnell said that there was “only one solution” preferred for asset management: EVS’s IPDirector, “which we have used with many different clients and so were therefore confident that it could deliver a system of this scale. It was rolled out to deliver and manage all the archive and send all clips to the tape robots in the BT Tower; it also allows all production staff to have instant access to that media.” Cameras and mixers, meanwhile, came from Sony, “because with a huge amount of freelance staff coming in it was essential that we select equipment that people could come in and use [quickly and easily].”

Chris Groom, head of post-production at BT Sport, oversaw the development of post systems and a dedicated team to work on them. Once again, accessibility and flexibility were pivotal – considerations boosted by the decision to “place everyone in the same room, so there is a really good flow of information between everybody.” The core architecture is provided by Harmonic’s MediaGrid, while the post team also makes use of Avid Unity ISIS shared storage and AmberFin software for file ingest. “We can virus check and make everything available through an Avid Interplay-based system,” he notes.

Bruce Brewer from Aspera – whose Orchestrator workflow automation application was integrated with EVS’ IPDirector to ensure high speed data replication between the Olympic Park and BT Tower sites – was also on hand to discuss his involvement in this landmark project.