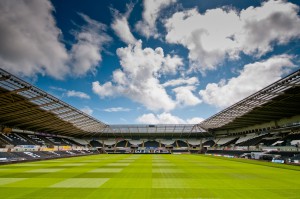 Ahead of the 2013-14 Premier League season, the Swansea City AFC media department led by Mark Williams began a series of upgrades to the Liberty Stadium’s audiovisual capabilities. “Up until this point we’d been taking a single HD-SDI feed from our OB compound, usually from one of the broadcasters covering the match, and piped that over fiber to my office in the West stand,” explains Williams.

“Looking to centralise everything within our existing AV control room, we created an optical fiber bridge between the OB compound using two ATEM Studio Converters as a rack mounted SDI to fiber converter. That was a lot easier as far as space and power requirements were concerned.”

Consequently, a pair of 16 x 16 Blackmagic Micro Videohubs route the video signals and other sources, including an HD feed from the stadium’s Sky receiver, between the AV room and locations throughout the Liberty Stadium. These include the Swans’ media suite, press commentary positions and the club’s player analysis team.

“The Videohub gives us a lot of flexibility,” says Williams. “We can at the touch of a button re-route – for example, the ‘Camera 1’ signal if it is being used by the club’s analysis team – or we can switch to the broadcast feed for press, so that they have access to all of the on the ball action.”

In the media suite, Swansea has installed an ATEM Television Studio alongside the second Micro Videohub, enabling the media team to monitor the various camera sources using the ATEM’s multiviewer. If necessary, lower thirds and keyed graphics, such as timers, scores and titles, are then overlaid on the clean feed by the media team.

Williams adds: “It is always good when a new system has a continuity to its interface and operation across all its various components and now, every part of our HD-SDI set up at the Liberty Stadium has that Blackmagic familiarity of use.”

“The quality of our video feeds to the various systems has greatly improved how we work behind the scenes. However the real difference won’t be seen by our supporters until the next phase of the stadium expansion takes place. That will include a giant fan screen in the stadium with the potential for introducing live match day content.”