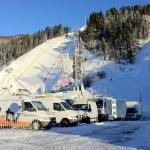 Wire Team, based in Lagano, Switzerland, has more than 20 OB units equipped with a wide variety of equipment for sport production needs, including the ability to broadcast from mobile or fixed uplinks. The company is definitely “sports oriented” since they are all sports specialised and do not own any other traditional TV facilities like theatres or fixed control rooms. And more than 80 per cent of the company’s income is derived from sport programming.

“In 2009, after incorporating part of Valerio Maioli, [the OB firm based in Ravenna], we could finally tackle a new market, since we previously owned only small and medium vehicles,” explains Severino Albertoni, Wire Team, CEO. “From that date on we could finally be engaged in larger operations with bigger OB vans and we could even be host broadcaster for some events.”

The fleet includes a mix of both Sony and Grass Valley vision mixers and cameras and is manned by 25 employees plus freelancers.

Albertoni says the company’s main business is concentrated in Germany, Italy, and Switzerland, from the Moto Mondiale, to the UEFA Cup, and many other international competitions. Recent events include “Campionato di Calcio” Italy, Serie A, Moto Mondiale, Moto GP, Formula Uno, Champions League, and Euroleague basketball. Events in Switzerland include Swiss Soccer Championship, basketball, hockey, and other sports. And events in Italy include minor sports as well as Italian basketball.