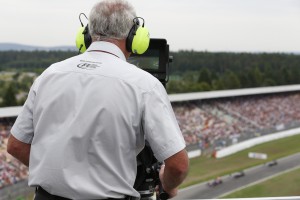 As part of enriching the archive, the challenge offers the opportunity for 450 million unique Formula 1 television viewers to have an active involvement in documenting the sport’s history. The task requires not just technical wizardry but also creative imagination to engage Formula 1 fans around the world to help with this goal.

Since 1981, over 60,000 hours of video has been meticulously stored and digitised in Formula One Management’s archive at Biggin Hill. This represents the sport’s animated history for the last quarter of a century. It is FOM’s ambition to digitally index the footage with audio and text commentary so the archive can be enhanced and used beyond the limitations that exist purely because of the size and scale of the collection.

However, simply to watch this archive in real-time would take many years, so a significant undertaking exists to index the archive so it can be accessed digitally. Challenge three sets bright and digitally-informed aspirants a significant task to first capture and then harness the nearly half-a-billion global Formula 1 fans to assist with providing audio and text commentaries of Formula One Management’s archive.

John Morrison, CTO of the Formula One group, says: “Formula 1 fans are the best informed sports fans in the world, and value the sport’s history highly. Through this challenge, we have the opportunity to work together to bring this history alive. It is an exciting prospect and I encourage all of those talented people who have a passion for Formula 1 to get involved.”

The winner’s proposal could help fans around the world to be given the opportunity to provide commentary for their favoured moments in the last 25 years of Formula 1 history as part of the digital indexing. For the challenge winner, the chance for the individual or team to win $50,000 and a trip of a lifetime to next year’s FORMULA 1 GRAND PRIX DE MONACO.

John Hayduk, president and CTO, Tata Communications, says: “The challenge is multi-faceted, requiring both a deep understanding of how to incent and motivate mass behaviour on a global scale, and how to use technologies for crowd-sourcing and digital indexing in order to realise this grand project. Being able to open up and deliver such a rich archive to the fans around the world is the most ambitious challenge yet, and we look forward to seeing the entries.”

Entry guidelines that detail challenge three’s requirements are available at the F1 Connectivity Innovation Prize website (https://prize.tatacommunications.com). The Challenge requirements are straightforward and do not require detailed submissions, simply a short and concise proposal that outlines a proposed approach to the key criteria.