Riedel Communications’ MediorNet real-time signal transport, processing, and routing network is helping to bring live coverage of American golf to viewers throughout Europe. Telegenic, an OB production company with its main office in the UK and a new US office in Atlanta, chose MediorNet to provide the redundant and decentralised signal routing and transport infrastructure required for its coverage.

“MediorNet, controlled by VSM hardware and virtual panels, provides the technical and production crew with unprecedented flexibility. The all-in-one approach, where we do not need to route signals in and out of various bits of equipment, drastically simplifies the setup,” said Andrew Wisniewski, US Operations Supervisor, Telegenic. “Riedel’s network-based design makes connecting the trucks and sharing resources much easier and more straightforward.” 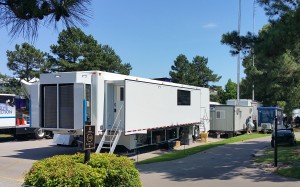 Running on two of the MicroNs, the App provides robust multiviewing capabilities for up to 18 video signals that can be used to create 4 Multiviewer screens. These can then be used locally or redistributed out to any of the MediorNet nodes. The integrated solution also includes Riedel’s RockNet 300 real-time audio distribution network that rides atop the MediorNet backbone.

“Multiple formats, low-latency SRC, and plenty of MADI provide a fully interoperable audio domain,” said Simon ‘Foz’ Foster, Deputy Head of Sound at Telegenic UK. “Integrating the MediorNet and RockNet systems into the Telegenic project has been a simple and effective process.”

At each golf course venue, the MediorNet components are all connected over a 10 Gbps optical fibre network to form a decentralised routing matrix. WDM multiplexers within the system cut the number of fiber connections required for Riedel’s Compact Pros from six single-mode cores down to just two. With MediorNet’s automatic signal rerouting capabilities, Telegenic teams were able to create full optical redundancy over just four cores.

One MediorNet Compact Pro provides signals for a large, high-brightness, mobile touch-screen system that facilitates interactive player interviews and analysis from locations around the course. Other MediorNet nodes handle signal transport to an on-site studio and the host OB truck.