Best seat in the house: Innovation scores at the DFL Supercup 2022 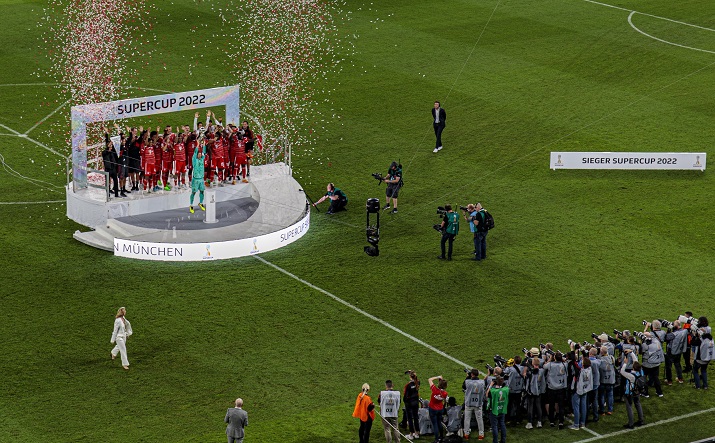 The fans of RB Leipzig are in fine voice with their songs, chants, drums and roars echoing around the Red Bull Arena as the DFL Supercup 2022 gets underway. It absolutely envelopes the pitch where ‘Die Roten Bullen’ are taking on the mighty Bavarians of FC Bayern München for the Supercup 2022.

In a demo suite in one of the skyboxes high above the players, however, the sound is just as immersive, as the match sees the premiere of live Dolby Atmos for Bundesliga matches on Sky Deutschland.

“I want to avoid bringing tonnes of technical facilities into the stadium. There are already 25 cameras in the stadium, and the carpark is full of OB vans. If we bring another, the carbon footprint is a nightmare.”

It’s just one of several innovations on show by the DFL (Deutsche Fußball Liga), its subsidiaries and partners here at the Supercup in Leipzig.

“As it’s the very first big game of the season, the Supercup is always a good way for us to showcase the media products we’ve developed over the last weeks and months,” says Steffen Merkel, DFL board member and executive vice president of audiovisual rights. “It also gives us the opportunity to showcase [what we’re using] over the next weeks and months in the upcoming season.”

“This is the first time that we are producing a Bundesliga game with immersive sound together with our friends and partners from Sky Deutschland,” says Merkel. “This is a very good example of how we innovate and how closely we collaborate with our broadcast partners.

“Sky has launched a consumer device, Sky Glass in the UK, and is launching it in Germany by the end of this year. It is a Smart TV with a built-in Sky subscription, but also a built-in Dolby Atmos module, so Sky Deutschland was in close exchange with us about how we could deploy Dolby Atmos as fast as possible. 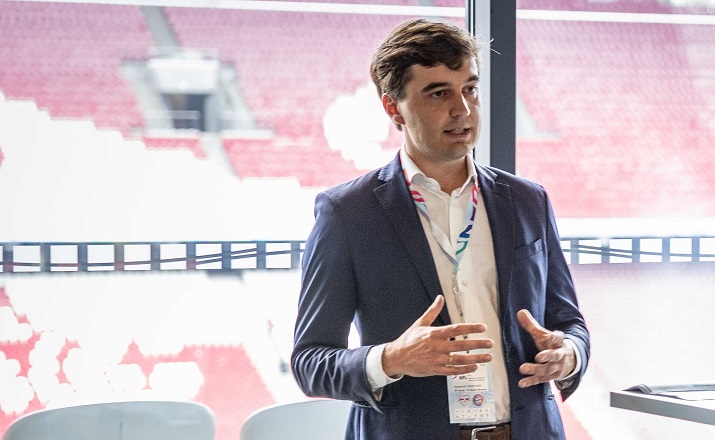 Steffen Merkel, member of the DFL management board and EVP audiovisual rights

“[DFL Supercup 2022] is the premiere; it is being produced remotely in Dolby Atmos from Darmstadt by our partner, Vidi, which is also downscaling this for use by all other broadcast partners who don’t take the Dolby Atmos signal. It will be deployed at all top matches in the 22-23 season as well,” continues Merkel.

“It’s our first live direct-to-consumer distribution in Germany, but it’s been seven years in the making,” says Kramper.

“Then the footprint in the market was really low, but now it’s a lot higher because of Dolby Atmos in TVs, sound bars, and also mobile devices. It gives you a broad reach. If you have a product like Bundesliga, which is consumed by many millions of people every weekend, you need to have a broad footprint in the market otherwise it doesn’t make a lot of sense.”

The additional data stream required for broadcast is minimal, says Kramper, and only requires two extra microphones at the ground. 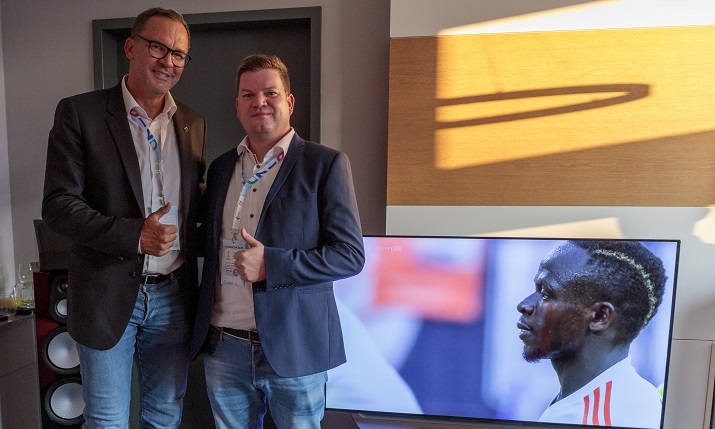 “In terms of streaming bandwidth, the lowest possible bitrate for Dolby Digital Plus Atmos is 384 kbps,” says Habann. “But here because we have the bandwidth that’s just peanuts, especially compared to the video. And with Dolby AC4, we can lower the bitrate by half so we could go down to 192 kbps.”

While the live Atmos operation pioneered by Sky UK is truck-based, the Atmos mixing for the new Bundesliga service is completely remote.

“It’s also much more scalable,” says Habann. “They can do two matches, or often three on a Saturday. They can add a second room if needed. Adding another truck would be much more costly.”

“I’m really excited,” says Kramper. “But we believe the setup we have today and the workflow we have today is just the beginning. This is the starting point.”

Battle of the champions

During the game, both teams had something to prove: RB Leipzig wanted to establish themselves in the coming Bundesliga season after winning the DFB Pokal last season in a penalty shootout against SC Freiburg; FC Bayern München, on a high after winning their 10th consecutive Bundesliga title, brought an excellent squad to Leipzig, including Canadian Alphonso Davies, and striker Thomas Müller and new star Sadio Mané. The latter would prove to be the focus of another innovation in use at the Supercup, the Starcam.

“This is a product that can be tailored to a lot of international markets,” says Merkel. “The idea is to use live positional data of the players and bring this together with the camera signal to have the camera follow a player for the 90 minutes of the match.

“In the beginning, it was a relatively manual process to do it. But now we’ve adjusted the camera in such a way that the broadcaster who is steering the camera can switch between the players that he wants to show, even during the match. So if a player has put in a really good performance, it’s possible for [the broadcaster] to have him in focus until the end of the match.” 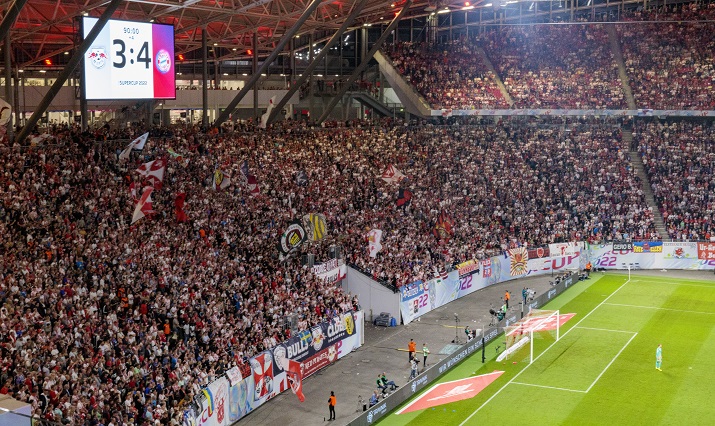 The Star Cam was offered to multiple broadcasters for the match, including Sky Deutschland and Sky Mexico, as well as DFL’s domestic free-to-air partners, with viewers able to watch former Liverpool striker Mané score once and help the Bavarians triumph 5-3.

Senior vice president of sports production for Sky Deutschland and SVG Europe chairman Alessandro Reitano took part in a panel-based discussion about innovation before the match.

He says: “Technology is the enabler to tell better stories. I’m really happy to see that with the collaboration with the Bundesliga and Dolby that we’re finally focusing on Dolby Atmos because it’s where I see the story coming along with regard to immersive [experiences] for the audience; you’re sitting at home, but you feel like you’re in the stadium. We’ve started now with Atmos, and I think if we play it smart, we can create all sorts of products.

“At the end of the day, we try to create incremental services for our customers and technology is a lever to do that,” he continues.

“From a Sky perspective, we have a fundamentally super product from the Bundesliga, and we want to create more products on top of it for target groups. For the traditionally focussed people, who are already watching the match without graphics, we can deliver that. For the young kids only watching highlights, not interested in [the full] 90 minutes anymore, we can do that.

“But I want to avoid bringing in tonnes of other technical facilities into the stadium. There are already at least 25 cameras in the stadium, and the carpark here is full of OB vans. If we bring another one, the carbon footprint is a nightmare. So, what we want to look at is how we can create more products in the cloud with a very small footprint.”

To enable this, Reitano gave the example of a proof of concept that Sky Deutschland was showing which only required a laptop. “Because the streams are in the clouds, you can create multiple products, multiple language products or specific products for different target [groups]. This is where we want to go; a smaller footprint and scalability will offer us more possibilities.”

Also revealed was an early version of a system created by Singular Live and RCS for Sky Deutschland, named ‘Best Seat in The House’.

“You want to have the best experience you can get out of this stadium with so many cameras,” says Reitano. “So what we are thinking about, as well as the small footprint, is how we want to deploy a single operator cutting a small number of SRT streams going into the cloud and who can orchestrate a [dedicated production].

“Say for example you’re an RB Leipzig fan, you want to have the best seat in the house with only Leipzig perspectives, only Leipzig data, you want to have a dedicated field reporter running around with a smartphone on pitch level, very close to the action, with a new perspective of the stadium. We want to really offer the customer an experience which you only get on Sky.

“Everyone who loves the 90 minutes in a very traditional way [should know] for us it’s untouchable, it’s our best-selling marquis product, it’s our bread and butter,” he adds.

“On top of that, we want to create [something] for the younger audience who have 15 minutes before kick-off. We’ll first create something curated by Sky, then in the next step make it interactive, obviously, because you’ll want to curate it at home, choose the resources you want to have, what kind of data you want, what types of interviews, what kinds of stories you want to hear from your players. The idea is really to offer the customer the best seat in the house.”
The 2022 DFL Supercup between Bundesliga champions Bayern Munich and DFB Cup winners RB Leipzig took place on Saturday 30 July