The fans are back! But what happens to augmented stadium sound? 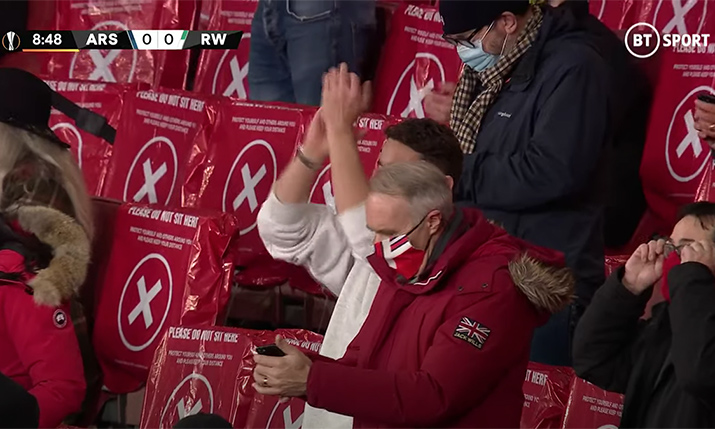 Football supporters in some parts of England were this week allowed inside stadiums to watch their teams play for the first time in more than 250 days. And on Thursday (3 December) the first live televised game since March was broadcast featuring actual (rather than virtual) fans. But, asks Will Strauss, where does that leave broadcaster ‘stadium sound’?

London is one of the few places in England where fans are allowed to watch professional sport in-person again. As a result, the first TV game with supporters was Arsenal’s home tie against Rapid Vienna in the UEFA Europa League, live on BT Sport (pictured, above).

Some 2000 home fans were present inside the 60,000 all-seater stadium, all socially distanced, complying with current government COVID-19 regulations for elite sport.*

Those who got to watch the game inside the Emirates Stadium were overjoyed, no doubt, even if it wasn’t as lively as normal. While the players appreciated any support they can get.

“If the atmosphere is poor, or if we start experiencing compliance issues, we will fade up the enhanced studio and turn down the stadium sound.”

But, for the broadcasters showing this game (and others this weekend), where does it leave the augmented stadium sound that has been deployed so successfully while matches were played behind-closed-doors?

The ‘fake audio’ or match Atmo has made televised behind-closed-doors football far more palatable for some viewers – while those who prefer the natural sound of the players and the coaches have been placated too as both options have been made available on many matches, certainly in the UK.

The return of fans, however, creates a quandary for broadcasters. If the stadiums were full, there would be no issue of course. You take the real match atmosphere for the world feed and move on.

But while 2000 buoyant supporters in a large stadium can make quite a racket, there is no guarantee that this will translate into decent television. When those same fans are quiet, the atmosphere will be non-existent.

Equally, 2000 fans inside a smaller stadium is often ample to generate a great atmosphere. 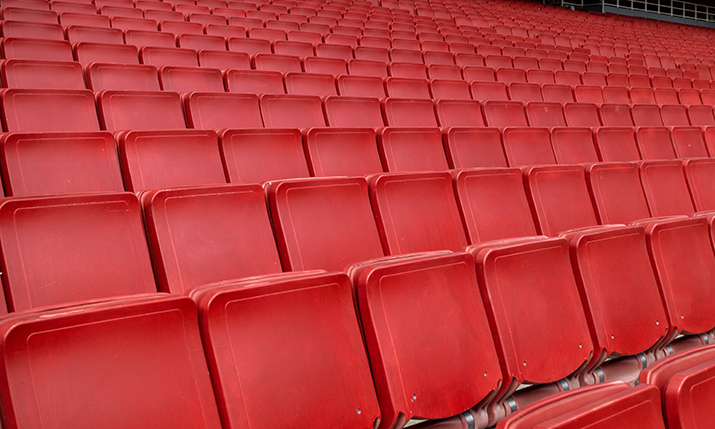 There will be more empty seats than supporters at all Premier League matches this week, despite the change in regulations.

In the Bundesliga, fans were allowed back in September only for the rules to change again in October. Matches are currently being played without spectators. For Germany’s Sky Sport, deciding how to deal with the crowd audio was a difficult circle to square.

Alessandro Reitano, senior vice president of sports production at Sky Germany, and the chair of the SVG Europe advisory board, acknowledges the difficulty of what might ordinarily have been considered a very simple decision.

“The challenge here was that in certain stadiums 400 fans make more noise than 5000, so we decided after two matchdays with fans to stop offering augmented sound as soon as fans are in the stadium, no matter how many.”

So, in Germany, regardless of what stadium or how many fans, augmented audio is off the table when supporters are present. But what of Arsenal against Rapid Vienna? A BT Sport spokesperson told SVG Europe what the broadcaster’s general stance is on augmented stadium sound. And it’s a bit of a hybrid.

“Where we offer a choice, on Premier League and UEFA Champions League, where we are the host broadcaster, we will switch so that the default main channel coverage will be [the real] stadium sound, and the red button will become enhanced sound.

“Where we don’t offer a choice, for example on rugby coverage, we will broadcast the stadium atmosphere but with an enhanced feed being fed but turned right down.

“If the atmosphere is poor, or if we start experiencing compliance issues, we will fade up the enhanced studio and turn down the stadium sound.”

All three treatments provide a temporary best-of-both-worlds solution, but one that is ultimately going to take some getting used to both from a production and viewer perspective. But, in 2020, we’ve got rather good at dealing with that sort of upheaval. And then, once we’ve got used to it, everything will change again. Don’t get comfy.

Arsenal vs Rapid Vienna was live on BT Sport in the UK on 3 December 202o.

*In the UK, which is currently operating a tiered system of restrictions in its efforts to reduce the spread of coronavirus, football stadiums in Tier 2, including those in London and Liverpool, are allowed to welcome 2000 spectators or 50% of the venue capacity, whichever is lower.

Information correct as of 6 December 2020.