There are huge opportunities in OBs, broadcasters tell students at NEP Day 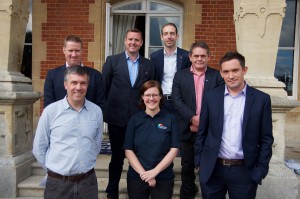 Television is crying out for new technical talent, particularly in outside broadcasts, according to speakers at the recent NEP UK Student Open Day. “It is really important for us, as an industry, to portray the opportunities there are [for engineers] — and there are some big ones coming up,” particularly in IP, said James Clement, head of operations, Sky Sports.

“There is a hole in our industry for broadcast network support engineers, people that understand TV, in all its various forms, understand media creation, understand the IP element that can support it in the background are woefully short,” he added. “We’ve got an aging industry, which has got probably another ten years worth of talent before we start having a real shortage problem.

“There are lots of different disciplines that you can go in to and that will be needed in the future,” Clement told the audience of about 150 students. “The shortages that we face are the same opportunities that you can take up.”

As TV technology changes, including the move to IP, new job possibilities are opening up, agreed BT Sport chief engineer, Andy Beale. Although BT Sport employs only about 350 people — as it works with partners like Timeline, NEP, Sunset + Vine and others to deliver its services — he mentioned that parent telco, BT, employs 500 ethical hackers, “people who are paid to hack systems and find holes.” As TV changes, “it needs good engineers to work out how it is going to work in the new world and be completely interoperable across all of our TV platforms,” said Beale.

Sky has 30,000 employees, from customer services and dish installers, to vision mixers and sound supervisors, so there is a wide range of opportunities, with new areas such as virtual reality being developed, said Clement.

“Having done [the first NEP Student Open Day] last year, it was interesting to see the different range 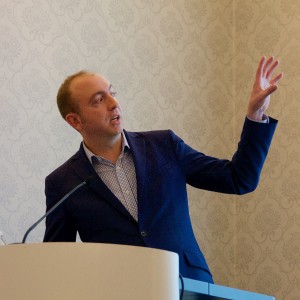 James Clement: “We’ve got an aging industry, which has got probably another ten years worth of talent before we start having a real shortage”

of jobs people wanted to go in to,” he said. He asked for a show of hands to check on the student’s interests this year and just a few wanted to be in front of camera, although he said that entry for these sorts of jobs is now a great deal easier (“now you can create your own breaks”), although they often have a short shelf life.

Even working behind the camera is easier to do now, as people can create a showreel with just the camera on their mobile phone. Indeed, many jobs now require a wider variety of skills. “There are so many varying crossovers between all the different roles now that we can’t pigeonhole people like we used to be able to do. It was very clear what job you did when I came into this industry, and it’s a lot different now.”

Sky has invested in the eSports channel, Ginx, and wants to improve its engagement with younger people, and the students “are largely the same market of people we are trying to [target] to launch our products”, which is why he wants to bring them on board to help create them.

Where is the demand?

“We see hundreds of CVs from people who want to be editors, or sound mixers, or those middle creative jobs which are sitting at the junction of production and technical, or they want to be producers,” said Beale. Very few want to do the more technical jobs, and most don’t even realise how much variety there is in the technology area. “Everyone says ‘we need technical people who are good and keen, and we can’t get them’.”

Although the more technical courses may seem like too much hard work, “there is a serious shortage in the industry of technical people,” said Sean Lancastle, independent education and training consultant specialising in broadcast technology and engineering (formerly with Southampton Solent University), who pointed out that many of those who start in more technical areas go on to more creative roles.

“As you progress, you actually become far more important, and part of the production team, naturally, because they have things they want to do and they need your support to say it is actually achievable,” added Tom Giles, broadcast technical manager, All England Lawn Tennis Club (Wimbledon), who worked with NEP until recently. “I think you get the best of all parts.”

For Steve Jenkins, president, NEP UK and Ireland, one major attraction of working in live production is the “get it done” attitude that is so essential when nothing can go to air unless there is a signal. Not only is it “a key factor to the excitement about this industry” but he believes that attitude greatly helped NEP UK recover from the fire at its facility last year.

Most of Giles’ most memorable moments working in the industry have involved recovering from disaster. “It isn’t necessarily the easiest jobs, it was the most hard work, the most catastrophic, and they’re the ones you remember.” You might want an easy life, but it is the times that test you that are the most satisfying.

You also get the opportunity to go to some of the biggest events in the world, and sit just outside them, in a box, watching a smaller screen than you’d have at home, and you’re stressed, said Giles, but: “It beats working for a living. It’s the best job in the world.”

“If you look at the value chain in TV. The jobs which are sexy are not where the value is,” said Beale. Good engineers are valuable, because they are rare, and attract a good salary, whereas the value of many production roles has come down.

When people think about engineering, they associate it with problem solving rather than creativity, but “the great pleasure in working in broadcasting is being able to combine those two things,” said Peter Taylor, production engineering manager, BBC, whose work includes looking after the Glastonbury Festival, Lambing Live, Last Night at the Proms, Olympics, and royal events.

Beale’s first job was working on a satellite truck for SIS, which was the first time he had used digital broadcast equipment (he had studied at Ravensbourne, which still had analogue kit at the time).

Rob Newton, NEP UK’s director of engineering and technology, first worked maintaining equipment for BBC news and current affairs, while Chris Cannon, its director of technical operations, did work experience with a camera hire company, which encouraged him to do a technology course, before becoming a trainee engineer at NEP. Pam Barnes, sound guarantee, NEP UK, started at an animation studio in the Scottish highlands, before getting a job in a recording studio in Glasgow.

Giles did a media tech course at Southampton, and got a job at Visions (the precursor to NEP) as a trainee, after about 100 phone calls over three months. “Eventually the receptionist said: ‘Would you just give this guy a job’,” he said, advising the students to “keep pestering.” If you don’t have experience, “it is far more about the dedication and commitment that you’re willing to show.”

Jenkins studied fine art, followed by graphic design, before going in to audio and video production, wanting to do animation. His first job was in retail, before getting a job in outside broadcasting, an area he hadn’t even known about before. He then progressed through engineering, technical management, commercials, commercial development, and now leads 230 staff across the UK and Ireland.

“It’s an industry that is constantly changing,” said Newton. “If you want to keep learning, it is a great place to be.” Indeed, for Giles it has gone from doing a match with four cameras to 25 cameras, with the same set up time, but when a camera goes wrong, it is no longer about having to fix it on the spot, but changing a board or replacing the camera. “Your level of engineering is now more system based,” he said.

Twenty years ago, a director would be more understanding if something didn’t work, but now “everything needs to be working constantly,” and usually does, he added.

When Jenkins began in OBs, he wasn’t trained for or planning on a management career, but progressed through the business, learning as he went. “When I started pulling cables around a football pitch and plugging cameras in to the side trucks, I had none of the skills that I actually use today in order to manage and lead people, negotiate, and steer one of the most successful businesses in the UK and Ireland, but this industry has cultivated that.”

“It is such a good industry,” said Giles. “Once you’ve got the bug, you don’t leave. It is an incredible place to work, and job to have, whether it is creative or technical, it’s brilliant.”

What they look for in applicants

“The thing I look for is enthusiasm, people that want to know what we’re doing, and any work experience that you can get helps,” said Cannon. “Positive attitude, a willingness to learn and inquisitiveness are vital,” agreed Beale.

“You’ll learn stuff at university that you’ll never use again,” because technology changes so quickly, said Newton. However, Beale believes it is important for students to understand the basics, and how television has been produced in the past, because that informs how it will be done in the future, even when you get to the level of UHD over IP.

“It was always the bigger picture. You go through education and you understand what a video signal is, or how a microphone works, but it is actually applying it,” particularly in the very limited time you get when setting up for a live outside broadcast, which was Giles’ biggest learning curve.

“The approach to problem solving is different from knowing what the problem is,” said Beale, and this approach applies however the technology changes.

The number one thing Giles wants to see on CV is “work experience.” That applies to production and creative roles too, added Cannon. “You just need to make yourself stand out from the rest.”