UEFA has met the clubs taking part in the UEFA Champions League Round of 16 to explain the video assistant referee (VAR) system to be used in the competition’s knockout phase this spring.

The knockout phase kicks off on 12 February — and UEFA has met the clubs involved to explain the video assistant referee (VAR) system that will be used from the Round of 16.

UEFA invited representatives of the 16 clubs remaining in this season’s competition — coaches, coaching staff and club delegates — to a meeting in Frankfurt this week to brief them on the system, which is designed to help referees in their decision-making process.

VAR is being introduced in the UEFA Champions League following successful technological testing and the training of referees over the last few months. The system, incorporated into the Laws of the Game last year, sees a video assistant referee review decisions made by the referee in certain key match situations with the use of video footage and a headset for communication. 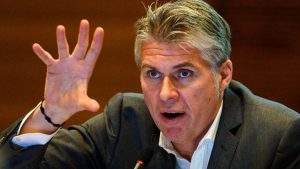 Rosetti explained that the VAR team will constantly check for clear and obvious errors related to the following four match-changing situations: goals, penalty decisions, direct red card incidents and mistaken identity. The Italian expressed UEFA’s confidence that VAR will represent a crucial tool for referees in the future.

“It was very important for us to speak directly with the clubs,” said Rosetti, “to explain to them how we are planning to use VAR in the UEFA Champions League competition, and how we have prepared the referees for this.

“We are convinced that VAR will be beneficial,” Rosetti continued, “as it will provide match officials with valuable help, allowing them to reduce clearly incorrect decisions — which is ultimately good for the clubs, the players, the coaches, the fans, the referees and the competition.”

In addition to the UEFA Champions League, VAR will be used at this season’s UEFA Europa League final in Baku, the UEFA Nations League Finals in Portugal in June and the UEFA European Under-21 Championship final tournament in Italy in the same month.

It will then be deployed at the 2019 UEFA Super Cup, and UEFA plans to subsequently extend the use of VAR to the UEFA EURO 2020 final tournament, as well as in the 2020/21 UEFA Europa League from the group stage onwards.