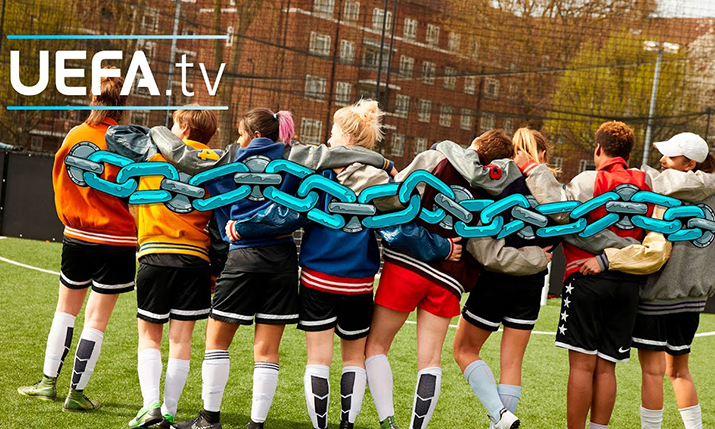 UEFA is to launch the Together #WePlayStrong YouTube channel as it looks to further increase interest in women’s football.

Following a pilot last year that received nearly 6m views, the #WePlayStrong YouTube channel has been created to cultivate the growing community of girl and women football players and fans, encouraging more to feel proud to play and feel inspired by showcasing confidence and togetherness.

The channel is part of UEFA’s ongoing strategy to grow the participation of girls’ and women’s football in each of its 55 national associations.

UEFA has recruited some of the biggest names in women’s football to form what it calls the “content creator squad” for the channel.

Swedish defender Petronella Ekroth, who moved to Italian giants Juventus this season, will become part of the channel’s team of vloggers, alongside UEFA Women’s Euro and 2017/18 UEFA Women’s Champions League winner Shanice van de Sanden, of Lyon and the Netherlands.

The channel will offer a variety of original content, focusing on themes such as daily insights into players’ routines, funny challenges, beauty and style content, and health and fitness advice, as well as providing a platform for inspiring women and players across Europe, who love football, to share their experiences of the beautiful game.

Ekroth said: “I loved watching the players last season and I’m excited to see what I can bring to the #WePlayStrong channel this time around. For me, it’s important to show people that professional footballers do have normal lives in addition to working hard on the pitch.

“I can’t wait to get started and share my experiences of moving to Juventus, especially as I’m currently trying to master a new language. I hope people enjoy it and are also inspired to perhaps start their own journey through football.”

Van de Sanden added: “I was so proud to be able to share my story through the #WePlayStrong documentary series Strong Is… last year and I’m looking forward to being able to continue to share the message that it’s important to be yourself no matter what. I like to stand out on and off the football pitch and I’m particularly looking forward to sharing my passion for style.”

Freestyler Cooke continued: “I’m honoured to be part of the #WePlayStrong squad and I’m excited to bring my freestyle skills to viewers across Europe, introduce them to some inspiring girls and women who are making waves in the women’s game and even give some behind the scenes insight into UEFA Women’s Champions League! It’s going to be amazing.”

Guy-Laurent Epstein, director of marketing at UEFA said: “The #WePlayStrong YouTube channel is a platform designed to inspire girls and women around the world. Our aim is to not only make #WePlayStrong a thriving digital platform, but an inclusive and supportive community.

“Our social media engagement has doubled since the first year of our campaign, and we want to continue to produce content which is entertaining, aspirational and relatable. In a world where YouTube plays a huge role in the life of girls and women, we’re proud to have added three more inspiring women footballers to our channel, and we’re looking forward to sharing their professional and personal journeys online,” he added.