United Broadcast Facilities was OB partner for the MTV EMAs on Sunday night in Bilbao, with 14 trucks in the compound and a full UHD production including RF systems supplied by Broadcast Rental.

The production demanded 14 trucks from United, around half its fleet, with 15 UHD edit sets, 150 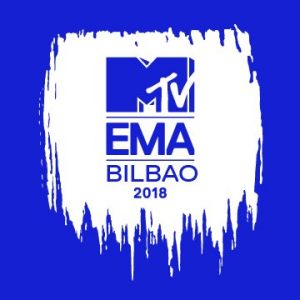 Bolke Burnaby Lautier, technical project manager for United told SVG Europe that, “this is our sixth year in a row, as a full project. The whole show is for MTV Worldwide so it goes to every channel around the world. The venue in Bilbao is great. We’ve got lots of space there.

“The project is divided into several areas. We’ve got the main show, which is what most people see. That’s full UHD, with 22 cameras including the six RFs. Last year it was hybrid, where the cameras and switcher were UHD but the RFs were HD and the EVS play-in was HD. Now, everything has moved to UHD.

“This is all working on a fairly big DDP central storage infrastructure, connected with all the EVSs and fifteen edit suites. All the data is available to everyone; every clip/segment can be played out anywhere in the infrastructure. DDP is similar to an Avid Unity, but it is an open-source system.

“That main show is UHD flypacks with all the RFs,” he said. “Then there’s a pre-event red carpet show, with a link into the main show. That’s a separate truck and production, connected into the whole infrastructure.

“Then there is a digital show, which is for social media outlets on the internet – that is also a different truck with a different production team. And there’s also a remote show, which is basically a concert the day before. Songs from that are edited in the infrastructure and played into the main show. And that’s an extra truck,” he said.

“So we provide three OB trucks, two audio trucks (one on the main show and one on the remote show) and then a bunch of equipment tenders. So all together, 14 trucks out there in Bilbao. A big live job — a bit different to sports!

“All the trucks are United, representing about half of our entire Netherlands-based fleet. And it’s all United equipment: if we’re short we outsource to other members of the [EMG] group – but this year it has not been necessary.

“Broadcast Rental are independent specialists,” added Burnaby Lautier. “In this case it’s RF: it could also be workflows or special cameras. If it’s off the beaten track, then I call GP!

“It’s a big step forward for everybody here to produce full UHD RF. I’m not aware of another job where six true UHD RF transmitters have been together on one show? And on top of that there are three or four HD RFs as well.

“The logistics of this whole thing are big,” he concluded, “with 95 people and 14 trucks moving to the other side of Europe with this specially-prepped UHD package. It’s quite an operation. The main show has 45 crew; the full engineering team and part of the camera crew are ours, and MTV is bringing in a director, of course, plus the creative crew. But the majority of the crew is our people.”

Single RF infrastructure for 1080i and UHD

The UHD RF system supplied for the live MTV EMA evening is certainly one of the biggest to date in Europe. For the main show Broadcast Rental supplied six DTC Aeon UHD RF systems (two Steadicams and four handhelds) together with VideoSys camera control systems and Sony F55 cameras. For the red carpet show there were two DTC OBTX RF Steadicam systems with VideoSys and Sony HDC P1s. Backstage there were two DTC OBTX Steadicam RFS with the same configuration and one RF package covered the remote show. 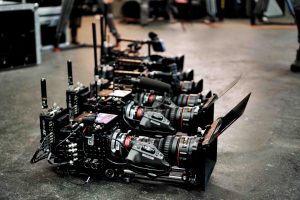 “It’s a huge event,” said Broadcast Rental founder and CEO GP Slee. “Especially so in UHD, with all the separate isolated feeds and editing facilities plus a lot of different sources with delays. The difference here is that it’s a real live entertainment show, with music, lip sync, graphics, intercom and more. It’s complex.”

Regarding the RF combination deployed he said, “DTC launched this new system last NAB. The thing with the UHD RF system is that DTC and VideoSys are using the same encoder and decoder ports.

“The big difference between DTC and others is that you can use the original infrastructure that you’re using for 1080i, so the receiving infrastructure is the same as the former 1080i infrastructure. That’s a big benefit,” he said.

“You can also use the same receivers as you used for the 1080i. So in your single infrastructure you can have a mix of 1080i transmitters and UHD transmitters. That’s the big difference,” said Slee.

VideoSys Broadcast managing director Colin Tomlin commented, “We have a close working relationship with Broadcast Rental, having supplied our Camera Control systems for many years now. The Broadcast Rental guys have always been at the forefront of broadcast RF technology, and by taking delivery of the new 4K AEON TX-CC they have once again proved to be true pioneers in this sector.”