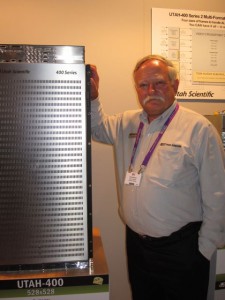 “We work very closely with a couple of OB operators in the US and Europe and one thing that is interesting is that while the video side of routing is settled the audio side is still a big question,” says Scott Bosen, Utah Scientific, director of marketing. “But the move is to use MADI to interconnect the trucks and have specialised recording for audio.

The MADI interface, which packs hundreds of audio signals on a single fiber connection, continues to give OB unit providers more flexibility in how they move audio signals around the truck (and between trucks).

“NCP [in the US] is rolling out a large MADI section and that is our initial effort in the OB world,” adds Bosen. The implication of MADI in the European market is more router fiber ports and terminals as many venues are already pre-cabled for fiber signal distribution.

Reto Brader, Utah Scientific, general manager, EMEA, says the company has successfully pushed into some new accounts with larger routers and embedded audio leading the way in the OB environment.

“In the last three or four years the typical router has more than doubled in side, at least in terms of outputs and inputs, and that is all because of  multiviewers and monitors,” says Bosen. “Previously the physical limits of monitors limited the number of outputs but multiviewers are a whole new game. With some screens displaying 32 pictures routers need to be serving 200 and even 300 feeds.”